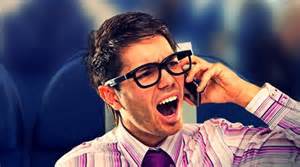 The FCC is finally loosening rules on using your phone while flying. These rules are ridiculous and I wrote a blog about why. But now that the rules are changing your friends at Congress want to get involved.

The United States Congress is considering a bill sponsored by Bill Shuster (R – Pennsylvania) and co-sponsored by 29 members (18 Republicans and 11 Democrats) to make talking on the phone during a commercial flight a crime. The Prohibiting In-Flight Voice Communications on Mobile Wireless Devices Act of 2013 is coming to an airline near you. Hooray!

The federal government is poised to make me safe from obnoxious phone callers, fathers and mothers wanting to talk to their kids, business travelers who need to keep up with projects, friends who want to touch base, and anyone who wants to talk on the phone.

Why have they taken on this potential crisis issue? Because their focus groups tell them it will be popular, that’s why.

Well Congressman Shuster, I hate to break the bad news to you but we don’t live in a Democracy (thank goodness). We live in a Representative Republic and there is a little document called the Constitution of the United States that supposedly limits your power.

Judging by the comments below the article the focus groups are doing their job well. Most people apparently want the government to ban talking on phones during a flight.

Is talking loudly on the phone in a movie theater or at the table next to me such an offense the federal government needs to get involved?

My gym has a rule about cell phones and somehow they didn’t need Representative Shuster to come in and do it for them. Airlines themselves are considering such a ban. Fine and dandy. The gym can and should make that call and so should the airlines. If they make such a rule and I decide to fly that airline or go to that gym then I should abide by that rule, but the federal government? A law? Presumably to be subject to imprisonment for violation therein?

Are you kidding me?

If they can pass a law like this; what can’t they outlaw?