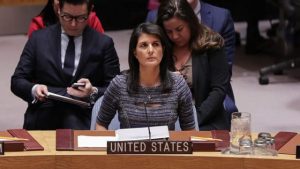 Some comedians pranked United States Ambassador to the United Nations, Nikki Haley and it’s not all fun and games. The comedians asked Haley about a fictional country named Binomo. Haley indicated she knew about Binomo and was looking into Russian activity into their recent elections. There is no Binomo. What’s not funny about this is how Gary Johnson was treated when asked about the Syrian city of Aleppo. Let me compare the two incidents.

Johnson was the Libertarian candidate for the United States Presidency and was engaged in an interview when asked a question about Aleppo. The topic of conversation was not the Middle East and the insertion of Aleppo was largely without context. Haley was engaged in congratulating who she thought was the Prime Minister of Poland when asked if she was aware of the situation in Binomo. Like the Aleppo question, it came largely without context. In both cases the person hearing the word did not know exactly what was being discussed. That’s all fine and good. I mishear people all the time, particularly when a new topic comes up without warning.

It’s the reaction to the incident that tells us everything, not necessarily about Haley and Johnson although it speaks intrinsically to the values they hold as humans, but the response of regular people. Haley pretended she knew what was being talked about. She gave vague, politician friendly answers. We’re watching that very closely. I’ll report back to you when I find out more. She lied. Johnson simply asked for clarification, What’s Aleppo? The fact he used the word ‘what’ instead of ‘where’ clearly shows he was confused as to the reference. When it was made clear what was being discussed was a city in Syria, he went on to answer the question fully and cogently.

The fallout from the Johnson incident largely eliminated him from serious contention for the presidency although I suspect he had only small chances even without the event. Haley will suffer not at all. Those who support her will laugh it off as nothing and those who don’t will call for her to be fired. Nothing will happen and all will be as it was. That’s a shame.

If the people of the United States actually had the values they claim to have, Johnson would have been lauded for admitting, with a simple question, he didn’t know what he was being asked and needed clarification. Haley would be shown as a liar who is happy to pretend knowledge when she has none. This is testament to morality and ethics far more than proclaiming belief in one deity over another.

I’m quite certain if we presented these two cases as a hypothetical to a large audience there would be an almost unified conclusion. The person who doesn’t understand a question but pretends they do is clearly unethical. The person who readily admits they didn’t understand something and seeks clarification would be considered the better human. It’s unquestionable which answer was ethically and morally correct.

If Haley is too egotistical to even ask for clarification on the question presented by the comedians, what does it say about her character? What won’t she lie about? The answer is clear, lying is second nature to her. She does it without thought and great skill. This is who we apparently want leading us. We don’t want someone who honestly tries to find solutions but prefer a liar who glibly and with charm pretends to know things she or he does not.

Character is actually important but it means nothing when it comes to securing elections. I shouldn’t go that far, having a strong moral character does mean something, it means you’re going to have a very difficult time getting elected. And then we wonder what’s wrong with this country.

There is an enormous gap in perception in this country. The gap between admiring what we know to be ethical traits and our willingness to vote for those who don’t display them.

Aleppo vs Binomo is just but a single, stark example.