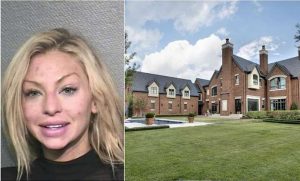 There’s a trendy story about a woman, Lindy Lou Layman, who damaged some expensive pieces of art after being intoxicated at the home of a prominent Houston Attorney, Tony Buzbee. It’s not completely her fault. She’s nuts, I get that, but bear with me for a moment. I’m going to have to do a lot of speculation but I think it’s important to consider our actions and Buzbee needs to think about that as well as Layman.

It is claimed Layman and Buzbee were on a first date and I’m already suspicious of the official story. Why didn’t Layman have her own car? Did they meet at the restaurant or wherever and then decide to drive back to his place in his car? I suspect they simply met while out on the town. Layman is an attractive young woman and Buzbee a wealthy man. Eye contact was made, drinks were purchased, things progressed, and she agreed to return home with him.

She got drunk and Buzbee decided he’d call her an Uber rather than continue the date. Again, suspicions raised. Why wouldn’t she leave when he called her a ride, then hide in the house, and finally begin to destroy property. It seems fairly apparent Buzbee made certain verbal contractual statements. You can stay until morning and we’ll go get brunch. I’m having a great time and would like to see you in the future. In exchange for these verbal commitments some sort of oral or other services were provided. After the completion of services Buzbee decided he’d had enough and wasn’t going to fulfill his verbal, and non-binding, contractual statements. He called an Uber and went up to bed. Thanks for the memories.

Somewhat or completely intoxicated and feeling both rejected and used, Layman began to take out her feelings on the artwork in the house. Hearing the commotion at some point Buzbee realized the girl he treated like crap was maybe a little pissed about it and wanted vengeance, go figure. Police summoned.

What’s the lesson here? I’m not sure. Buzbee might well not have gotten the services he desired if he’d been honest with Layman about his intentions to send her home immediately after completion. He almost certainly lied to Layman in order to get what he wanted. Buzbee shouldn’t be such a douche. She has legitimate grievances with him. Of course, there are few legal remedies to such breech of contract situations. What damages has Layman suffered? A little humiliation most certainly but anything financial? Hardly. In addition, Layman should blame herself for performing services so quickly and readily before understanding the nature of the relationship. Destroying expensive art is a good way to end up in prison and she chose to do so.

Actions have consequences. If you treat another person like garbage that other person might consider doing harm to you or your material possessions.

The question becomes if it was worth it. If I were to ask both Buzbee and Layman, I think they’d both say no. Something for us all to think about when dealing with other human monkeys.

You never know, maybe they’ll end up married. They just might deserve each other.