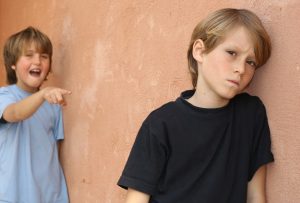 The presidential election in the United States this year has plenty of “scandals” rearing their head seemingly more than once a day but the one swirling around Eric Trump and his statement that his sister, Ivanka, would not allow herself to be harassed interests me.

The basic premise is that a person should not allow themselves to be bullied, harassed, sexually abused, physically abused, mentally abused, taken advantage of, or otherwise treated poorly by another person.

I think there is a small amount of merit to that idea on a basic level. If a person is subject to any of those things they should immediately stand up for themselves. However, the reality is standing up for yourself can have serious negative consequences. Often times the bully is physically stronger or in a superior position within the organization. People want jobs, a marriage, an education, they are not in a position to just leave as Trump suggests.

To suggest anyone who is willing to put up with some sort of bullying is complicit in the bullying is largely mistaken.

I’m going to tell you a personal story on this subject. In my high school I worked for the yearbook staff. We had a teacher supervisor but it was mostly us putting together the yearbook. The last quarter of the semester was largely sitting around doing very little because the yearbook was mostly complete and there wasn’t much to do. The supervisor was one of those teachers who hates students. She was a bully. She would make up stuff to do and intimidate the straight A students with threats of a bad grade. I was a straight C student so I didn’t much care. One day she gave us a test. It was an incredibly stupid test with dumb questions about the yearbook. Who knows where she got it. We all seethed but the other students, top honor students who needed a good grade for the most part, sat down and took the test. So did I. But, in a fit of independence I wrote some choice words on the test. “This test is bullshit”.

I got suspended for three days. Barely a blip to what others risk and yet it took some courage to make the stand I made.

For a rising young journalist who is sexually harassed the choice might have been between accepting it or ending his or her career. For a spouse being physically abused the choice might be to accept it or lose her or his marriage, children, or even life. For a young student it might mean the loss of a degree and years from his or her life starting fresh in a new place. For an athlete it might mean losing her or his position on the team.

Yes, you can stand up to the bully but there can be terrible consequences for doing it. The idea that people allow themselves to be bullied has a ring of truth to it but doesn’t stand up to examination. We all put up with things in order to get along with our lives. We do it everyday, anyone who says otherwise is living in an ideological fantasy realm. The more we want something, the more power the bully has over us because we are willing to accept more abuse.

The real problem, it goes without saying, is the sicko who takes advantage of a superior position and gets their jollies harassing those beneath them.

When you grow up rich, with every advantage, with many options; it’s easy to think you can’t be bullied, it’s just not true.

One thought on “Allowing Yourself to Be Bullied?”