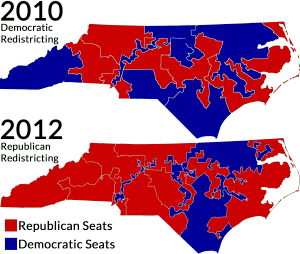 The candidacy of Donald Trump for President of the United States is proving interesting in a variety of ways and one of them is how starkly it shows the dangers of gerrymandering.

Case in point is the reelection campaign of Mike Coffman from Colorado. It is one of the few competitive races in the nation. Because of this he has to take moderate positions appealing to a broad range of voters. He must reject extreme positions.

The problem is that gerrymandering is so prevalent in the United States that only 66 of the 435 House of Representative Seats are contested. That means about 85% of the people running our government know they are going win the general election. Their toughest challenge is getting through the primary election. The primary election is where special interests and people aligned with extreme positions have undue influence. In the primary the voter turnout is very low so candidates who appeal strongly to a voting minority can and often do win. Thus we get more and more extreme candidates from these gerrymandered districts.

This in turn leads to extreme politics once the politician gets to their state or federal position. Each district is determined by the very politicians who currently sit in office. Thus they have a strong incentive to make sure they are reelected and do so with gerrymandering.

In addition it subverts the democratic process for people causing them to be frustrated and feel they have no voice in politics. For example, in the 2012 election in Pennsylvania Democrats received more votes than Republicans but Republicans won 13 of 18 seats in Congress.

New York actually counts prisoners towards their total population because it gives them more seats in Congress despite the fact these prisoners can’t vote.

What’s the solution? Not so easy. The Supreme Court has ruled states have the right to draw their districts how they see fit within certain guidelines. Basically because there are no Constitutional standards the Supreme Court and the judicial branch is largely helpless to prevent gerrymandering except in extreme cases.

The only solution I see is a Constitutional Amendment that forces states to draw their districts by mathematical algorithm.

Not that this would solve all issues but it’s a step in the right direction. Several states have already taken steps toward doing this and if 34 states agree they can force that rule upon everyone else.

I don’t think there is one solution to all the ills of the world but I think this is one step that would clearly help.