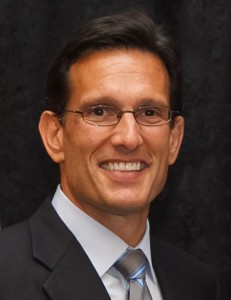 My disgust with politics continues to rise today with a second story that makes my blood boil.

Congressman Eric Cantor was until recently the Majority Leader of the House of Representatives. He took his district for granted and failed to put enough effort into his primary election campaign and was defeated. This means he won’t run in the general election and won’t represent his district for two more years. Because of this he gave up his position as Majority Leader to make way for another Republican to move into the position.

Now he’s decided to simply quit Congress altogether. He’s told the governor of Virginia to hold a special election, the winner of which will serve out the remainder of his term which expires in January. He’s basically leaving five months early to pursue other interests which he did not disclose. It’s fairly safe to say that he’ll be earning more money in this new endeavor likely being paid by the companies whose dollars influenced his vote while he was supposedly serving the people of Virginia.

In his resignation speech he has the nerve to claim he is doing it for those self-same constituents who voted him into office. Who spent their time and money on his campaign and election. We must remember that Cantor was elected to a two-year term. When he ran for election he promised to serve the people of his district for two years.

I want to make sure that the constituents in the Seventh District will have a voice in what will be a very consequential lame-duck session.

What a load of crap. He’s quitting so he can get a head start on whatever his lucrative new career will be while completely abandoning his constituents and costing them the considerable amount of money it will take to hold this special election. Then he tries to claim he’s doing it for them? This is a complete lack of personal responsibility. This is complete lack of honor. He was elected by people who believed him and now he’s fleeing when faced with adversity. Yes, losing your primary was tough. Yes, serving out the remainder of you term and trying to do your job instead of quitting and going for the money is hard. It requires something called integrity. You, former Congressman, apparently have none.

Why don’t you just quit today. No loss. I can’t imagine who is going to hire this man but I’m sure they are lined up and will give him a better paying job than the vast majority of honest and hardworking Americans, be they Republican or Democrat, make. He’ll peddle his influence and buy a bigger house, take more vacations, and go on lucrative speaking engagements.

I wouldn’t pay him a dime but I guess I’m in the minority.