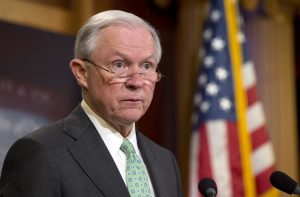 I wasn’t planning on writing about Attorney General Jeff Sessions and his comment about being amazed that a judge in Hawaii could put a hold on an Executive Order. Then he tried to pass the entire thing off as a joke, complaining that no one has a sense of humor any more.

So, anyway, now I’m going to comment. This strategy of covering up for a stupid statement by pretending you are joking is a clear indicator of lack of character. Sessions said something stupid in two ways. He referred to Hawaii as an island in the pacific as if that made if somehow less of a state, then he stated amazement over a point of law that he should well understand, he being the top law-enforcement officer in the United States.

If Sessions parents had taught him a little something called personal responsibility he would have handled his statement differently. He would have admitted that the word amazed was improperly used. Perhaps he doesn’t like the fact that we have a system of checks and balances in the United States but he certainly should not be amazed by it. He was also clearly making a derogatory statement about Hawaii and the judge in question. He should have apologized. That’s what a man of character would do.

It’s not up to me to speak for Sessions. He can speak for himself. However, I do get to judge a person by their words. Again, the original statement was rude and he probably misused the word amazed. I’m angered by his trying to pretend he didn’t make a mistake at all. That he didn’t insult the state of Hawaii.

I said something wrong, insulting, and stupid. To cover up this fact, I’ll pretend I was telling a joke. Shame on you for not having a sense of humor. Nope, not shame on me. Shame on you for a complete lack of personal responsibility.

This seems to be the standard way people excuse their mistakes these days. Well, it’s not really a mistake, I was just telling a joke, and it’s your fault for not getting the joke. I hear it all the time in conversations with friends, the highest levels of political discourse, from various media sources, sports figures, and on and on.

The attempt is to change the course of the conversation away from your misstatement. Rather than admit a mistake, it’s better to attack your opponent with whatever weapon you have available. Accusing someone of not having a sense of humor forces them onto the defensive. I do too have a sense of humor. I like to laugh. Suddenly we’re no longer talking about the original statement. We’re talking about my lack of humor.

It would be pleasant if people had the character to admit mistakes. It’s one of the most telling things you can learn about someone. When they make a mistake, do they admit it or do they attempt to cover it up by accusing you of lack of humor? You can’t change them. Sessions is the man he is, there is nothing I can do about it. The only person I can change is me. I now understand Sessions is the sort of fellow who won’t admit a mistake.