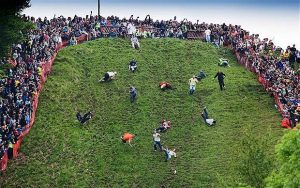 I just learned about a wonderful little festival called the Cooper’s Hill Cheese Rolling and Wake held in England in spring. The event involves rolling a nine-pound round of Double Gloucester cheese down a steep hill. A group of pursuers tumble after, hoping to be the first to reach the bottom and get the prize, the cheese.

The tradition has continued for many years but the modern world of litigation recently intruded in a fashion that I find quite interesting. Prior to 2010 the event was run in what is called a semi-organized way. Basically, the same group of people got things ready and monitored the event but didn’t really have an official role in doing so.

This became an impossibility as crowds to the rolling grew larger and the possibility of liability raised an ugly specter over the organizers. The event itself is dangerous, often times competitors are seriously injured as they fall while in pursuit of the cheese. The cheese itself attains high speed as it tumbles down the hill and spectators are at risk. With larger crowds came the need for spectator control. Boundaries had to be marked to make sure people weren’t trampled.

These dangers are not made up. They are quite real and the organizers faced no small financial risk for running the event without the proper safety measures. In 2010, there was an attempt to restrict entry by charging a fee and other rules were put in place to keep the crowd under control. These measures met a great deal of hostility from the people of the town, and eventually the organizers had to simply throw up their hands and disavow themselves.

Since then, the event has occurred spontaneously with no official organization. This means if something happens there is no specific entity to sue. Some people will find this a sad commentary on the state of the world. That we can’t even have a nice little cheese rolling competition without risking financial disaster through lawsuit.

Not that many years ago people could gather like this for an event and if some tragedy occurred, there would be general sadness but no call for financial remedies. Those days are gone for good or for ill. If a child is trampled, if a spectator falls and breaks a hip, if the course isn’t properly marked and someone is seriously injured, if any number of accidents occur; there will be lawsuits. That’s reality. We can’t deny it.

I don’t begrudge the former organizers their desire to abandon the event and I don’t blame the contestants for continuing it in an open fashion. I would imagine, as the event becomes ever more popular, some formal organization will have to come in and take control. That being said, there is something about a bunch of people coming together and having some fun that warms the heart of this Libertarian.

Just a bunch of folks having a good time chasing cheese. If a few legs are broken or an ankle sprained, that’s the way of it. Ambulances are standing by, but lawyers are not.