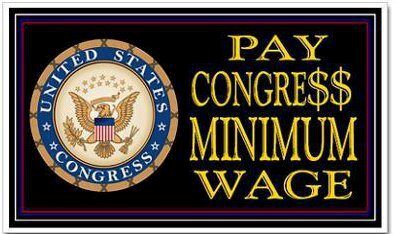 One of my prolific Facebook posting friends recently posted a photo declaring that US Congress members should be paid at minimum wage. My first thought was it was a rather idealistic but silly idea but then I decided, what the heck, I’ll take a rational, Randian Objectivist look at it.

My first goal was to find the actual savings in real dollars. There isn’t an exact savings because the number of hours in a year fluctuates depending on how many weekend days there are and leap years but the formula looks basically like this:

The Breakdown is all 535 paid for 2088 hours of a work in a fairly average year at the federal minimum wage. States have different minimum but I went with federal.

So, the actual savings, negligible, although I’m not one to completely discount $85 million even if it is .0023% of a larger total. It’s still $85 million!

Now, as to the practical aspects of the idea. First the perceived cons:

The cons seem to outweigh the pros at first glance but I’m not so sure. No one can run for Congress without financial backing anymore and the perks of being a Congress member, in the form of benefits given by lobbyist, far outweigh their simple salary remuneration. Congress members are already are bribed by lobbyist in the way of campaign contributions so I don’t think lowering the salary stops who can run or their susceptibility to bribes in any appreciable fashion.

The Supreme Court has ruled that anyone can anonymously give any amount to a campaign. Congress members will, until that decision changes, be completely at the whim of special interests in order to get elected. Once elected they might go against their financial backers but eventually such strong-willed individuals would be weeded out of the electoral process because they would get no financial backing the next election. Only those willing to do the bidding of the highest bidder would get elected.

The illusion of financial independence is simply that, an illusion. Our Congress Members are bought and owned by those who pay the campaign bills.

Having looked at it from this perspective I’d have to say, yeah, pay them minimum wage and save a small fraction of the federal budget but in examining it I realized something very interesting although off-topic.

Let’s say, for argument’s sake, we do have 10,100 representatives (100 senators added). At minimum wage that is about $153 million in salary or an increase in $60 million from current expenses but …. they work from home! No staff. Each one represents a much smaller district and has less influence, huge decrease in the cost to get elected, and less individual power so that lobbyist must spread their money very differently. It might even be impossible for a lobbyist to bribe enough Congressmen to get legislation passed.

There would have to be some serious reorganization in regards to committees but with the speed of computers I don’t see this as impossible. Voting is easily done with computers. It makes it much harder to play the You Scratch My Back game. It makes representatives much more accountable to their districts.

It does leave the Senate as a beacon for bribery and misconduct but with their six-year election cycle they’ve always been a bit more independent.

I think it might actually work to remove corruption from the cycle and I’m convinced that the reduction in staffing, housing, travel, and the rest would end up saving more than $85 million!

Am I crazy? Could this work? Tell me in the comments.