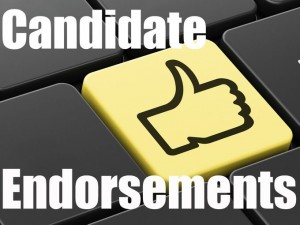 I just finished watching as much of the Sarah Palin endorsing Donald Trump video as any rational, sane human can stomach and I have come to realize that an endorsement, any endorsement, is a net negative. That more people will be turned away from a candidate no matter who is endorsing them. When and why did this come to pass?

I think it’s an interesting question that goes well beyond the ramblings of Palin, who, by the way, went to college with me back at the University of Idaho. Yep, we were classmates. She lived in the women’s dormitory right across from Upham Hall where I spent my time.

In any case, that’s not the point here.

My supposition is that endorsements likely alienate more voters than they sway. This can be debated and I welcome anyone who would refute me but, for the sake of this blog, I’m going to assume that statement is true.

What is the cause of this dramatic shift? I’m of the opinion it is the plethora of information available about all of the candidates. I think people are far more comfortable choosing a candidate on their own, simply because they know that much more about them. Prior to the explosion of the Information Age people had to rely more on the opinions of others to decide their ballot because their knowledge of a candidate was limited.

It’s an interesting phenomenon to me because the general opinion seems to be that most voters are not particularly informed about their choices. Republicans and Democrats largely blame “the media” for twisting the opinion of the voters.

I think exactly the opposite. It seems to me that voters in general have a significantly better idea of the various candidates and stronger personal opinions about them than did people prior to the availability of so much information.

I think politicians far more closely represent the views of the average United States citizen today than they ever did in the past. This, by the way, is a bad thing. It brings us closer to becoming a Democracy, something I wrote about back in February of 2012.

The people who like Donald Trump and Hillary Clinton do so not because the media fooled voters but simply because the media more clearly explained the candidates to voters. Thus, it’s my opinion, people are less likely to be influenced by third-party endorsements. They know who the candidate is and they do not need anyone else telling them how to vote.

Let me know what you think.