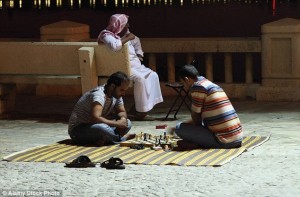 I read a story from the Associated Press about a Twitter war that is raging because a prominent Saudi Arabian, Grand Mufti Sheikh Abdelaziz Al Sheikh, declared that Muslims should not play chess.

No big deal? Just some religious kook making an outlandish statement? I disagree. For Al Sheikh to make this statement there is clearly backing for it in the fundamentalist Islamic world. Scholars have warned against the game in the past.

So why is this a big deal? Because many of the finest chess players in the world are from the Middle East and are Muslims. Chess originated in Asia and Muslims introduced the wonderful game to the western world. It has a long and important tradition in the Middle East and players are very dedicated to the game. Perhaps more dedicated to chess than to their religion.

And that’s important. It is also the way things should be. You should be more loyal to the things you like than to a religion or to a nation. That is the heart of the Libertarian political belief. We should associate with those who enjoy the same things as us, and let others do the same.

I don’t like playing with dolls but it’s not my business if you do. I love playing chess and spend my time watching chess videos and playing the game with acquaintances from all over the world. And it’s none of your business how much time I spend doing it! Nor would it be the business of any leader of whatever religion I happened to believe. I’m an Atheist for public record so it’s a moot point in today’s argument.

I happened to be born in the United States of America and a chess playing friend happened to be born in Iran. What is important is that we both enjoy playing chess. That is our bond and it has nothing to do with the circumstances of my birth or an edict from a ruler or religious leader. It is my choice to play chess with those who also enjoy the game.

I hope my chess playing friends, who happen to be Muslims, recognize this ridiculous statement for what it is. It’s simply an attempt to control them by restricting the things they love. Sound like anything governmental or religious leaders have done to you? Maybe you need new leaders or perhaps you should give up on the idea of an organized religion altogether.

That being said, religion itself is not the problem here, it is the twisting of power to control adherents that upsets me and hopefully some of my friends. If you believe in Allah, God, Lucifer, the Earth Mother, or any other deity, that’s cool. It’s your business and I don’t much care. Would that everyone else felt the same way.

I play at Lichess and GameKnot and my user name is tomlib. How about a nice game of chess?

2 thoughts on “Chess versus Islam”