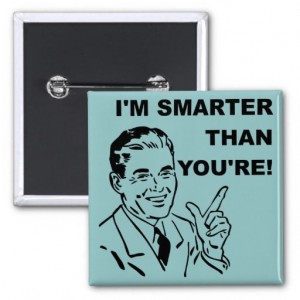 I just added a blog to my Stupid Comment of the Week collection and, while discussing it with my co-worker Joe, found his observation to be extraordinarily intriguing. His thought essential involved the idea of perceived intelligence. Let me explain.

The original stupid comment involved a mathematical equation involving prime numbers but it is the implications of that comment that intrigue me.

The commenter got themselves involved in a complex mathematical discussion in which they felt their ideas would easily trump that of the established mathematic community. Their idea was nonsensical and well-worthy of inclusion in my Stupid Comment of the Week blog but it was the idea behind it, that Joe so ably pointed out, that I find so interesting.

Why would someone, without much thought or hesitation, enter into a complex mathematical discussion? I think there was a time when the sciences, as a whole, were respected and admired by the population. But in the last few years we’ve seen a stark politicization of science. When the science agrees with my political philosophy I respect it but when it does not I ridicule it. This attitude has filtered down to the average person so much so that they think they know better than scientists.

That is clearly what drove the comment in question. Anyone who had respect for the all but unfathomable nature of higher mathematics, which I do, would never so much as dare enter into an opinion that countered the established thought. At least not without considerable research. Yet the fellow in question, one assumes without hesitation, had the absolute arrogance to assume a greater knowledge than those who spent countless hours in study. The fellow in question did not hesitate to assume that their ten seconds of thought, if that, could simply and easily dispose of astonishing intelligence and hard work.

What does this tell us? That the average citizen believes they are smarter than those who work, who study, who spend hours in deep discussions with colleagues, who are clearly of superior intelligence? That the average, or below average, person thinks they know more than she or he who has spent a lifetime studying and learning?

It is a disturbing thought. If the average person believes they are smarter than the intellectual giants; what does it tell us about where the United States of America is heading?

I think this is a question well worth examining and I find I do not like the answer.

If the average person does not respect, does not admire, does not even so much as admit that the intellectual elite are in fact, elite, where is our nation headed?

The only answer I can come up with is that we are headed for obscurity. The United States will become an afterthought in the world. A has-been. A once great fallen into laughable disrepair.

I hope this is not the case but evidence is growing.