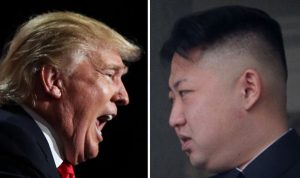 President Trump and the Wall Street Journal are disputing whether he used the word “I’d” or the word “I” in reference to his relationship with the leader of North Korea, Kim Jong-un. As a writer I find the use of words to be interesting and important. At their base, words are nothing more than sounds. However, these sounds are used to convey meaning and thus using the right words in particular circumstances can make a huge difference.

The disputed quote is as follows: I (I’d) probably have a good relationship with Jong-un. The quote using the singular “I” is the one touted by the Wall Street Journal while the one using “I’d” is that the White House and Trump claim is accurate. Let’s examine the different between the two.

If the Wall Street Journal is correct, Trump thinks he currently, most likely, has a good relationship with Jong-un. This statement is optimistic considering the two have engaged in a war of words from even before Trump came into office. Trump has called Jong-un by various derogatory names and the Supreme Leader of North Korea has returned the favor. Their relationship appears to be antagonistic.

On the other hand, if Trump’s version of the sentence is correct it means that under different circumstances he imagines he and Jong-un would have a good relationship. The exact nature of this other world is not explicitly stated but I’d guess it involves a situation where North Korea is not attempting to build Intercontinental Ballistic Missiles capable of dropping nuclear warheads on the United States.

What I find absolutely fascinating about this story is the vehemence coming from both sides considering the irrelevance of the difference. Whichever words are accurate they amount to exactly the same, horrific, thing. Jong-un is the leader of the most repressive, violent, and least free nation in the world. He has ordered the murder of his uncle, half-brother, and many others. His people live in abject poverty and worship him as a living god. He lives lavishly with many luxuries while many of the people in his country are starving to death. Trump believes he either does or could have a good relationship with this person.

The thought of the suffering in North Korea directly and indirectly attributable to Jong-un makes me physically ill. The thought of those millions of people suffering unnecessarily induces rage. The idea of him enjoying conspicuous luxuries and total freedom while denying even basic amenities to the people is nauseating to me. He is a vile person, possibly the worst excuse for a human currently alive.

It matters not if Trump is deluded enough to think he does have a good relationship with Jong-un or whether he only imagines he might have one; it shows a disturbing detachment from reality. No decent human could possibly imagine they have a good relationship with such a monster. To do so is to ignore the suffering engendered by Jong-un, to pretend the world is other than it is.

I ask you, could you have a good relationship with Jong-un? Would it be possible with an understanding of what he has done, who he is?

I hope the answer is no.