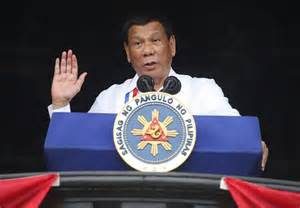 The Philippine President, Rodrigo Duterte, has often angered people for many statements and policies but he has finally gone too far for the Christians of his nation. He called god stupid. This is enough for Catholic Bishop Arturo Bastes to declare Duterte a madman with dictatorial tendencies. Duterte’s other sins have not raised quite as much outrage from the religious community.

Let’s take a look at what the Duterte regime has done since he was elected in June of 2016. He has publicly urged citizens of the Philippines to kill drug dealers and drug users wherever they find them. He said, “Hitler massacred three million Jews. Now, there is three million drug addicts. I’d be happy to slaughter them.” He has described drug users as not human. Any number of the killings appear not to be related to drugs in any way but simply murders carried out with drugs as the excuse. The murders were never prosecuted.

Duterte ordered the military to attack towns in the Marawi district because they might be harboring ISIS terrorists. Those assaults led to the displacement of over a million people and an enormous amount of suffering that continues to this day as the infrastructure of the region is largely destroyed and many of the former citizens are living in unsanitary camps. The terrorists were supposedly evicted although the history of the lasting effects of such actions would suggest they will return quickly enough or simply move somewhere else.

All of that was tolerated, if not supported, by his believers. But now they say he’s gone too far. In discussing the biblical story of Adam and Even Duterte came to the conclusion that god set up a ridiculous test for the young couple and because they made a decision that god apparently wanted them to make, it is moronic for all of their descendants to be branded with original sin. His exact words were, “Who is this stupid god?” and “You were not involved but now you’re stained with an original sin … What kind of a religion is that? That’s what I can’t accept, very stupid proposition.”

Even his supporters, those who believe he did the right thing in encouraging citizens to murder one another without trials simply because they were drug addicts, think he’s gone too far this time.

My question is what does it say about a person who supported Duterte in his desire to kill drug addicts without any judicial proceedings, without any attempt to help them recover from their addiction, to make no effort to determine if they were even drug addicts or dealers at all but simply close his eyes to the murders; but who draw the line at his assessment of the concept of original sin as stupid?