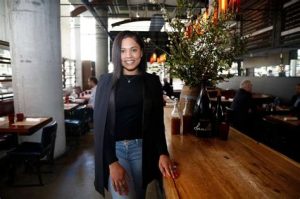 If you read reviews for restaurants or just about any other product, the news that Ayesha Curry’s planned restaurant in Houston, International Smoke, is already overrun with One Star ratings might be of interest to you. The idea of false ratings either to promote or denigrate a product is well-established but it’s rarely as easy to spot as on this occasion.

Curry is the wife of Golden State Warrior basketball star Stephen Curry. Said Warriors recently defeated the Houston Rockets in a heartbreaking seven game series, at least heartbreaking for fans of the Rockets. In any case, the series and International Smoke opening in Houston have brought out a plethora of One Star reviews on Yelp. Obviously, with the restaurant not yet open, these reviews are based on personal feelings toward Stephen Curry.

As a self-published author I’m well-aware that many Five Star reviews for novels are purchased by the author. I have been solicited for such on any number of occasions. I also know that business rivals often try to sabotage one another with One Star reviews. Where does this leave us? Frankly, in a tough spot.

It’s not always easy to spot a fake review. As the industry of writing them has become more sophisticated they become increasingly difficult to discern. If International Smoke was already open and someone was a good enough writer, it would be perfectly easy to be taken in by a fake One Star review.

I don’t have any real solutions to these problems but I do offer a condemnation to those who write fake reviews. You are potentially depriving someone of a lovely meal. You are harming yourself and others. To those in Houston writing One Star review of Curry’s new restaurant, you are doing yourself no favors. You are demeaning yourself. You are a less decent human. That is your choice but be assured, engaging in such behavior destroys, in small steps, your own sense of self-worth.

Perhaps you find it amusing and think it harmless but the reality is you are damaging yourself on a deep psychological level. You know you are untrustworthy, you are a liar. And whose respect do you need most of all?