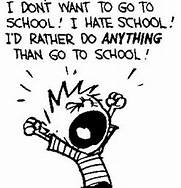 There’s a new science story making the rounds about life originating on Mars and coming to Earth. What I want talk about today is not this theory but the general attitude of Americans towards scientific endeavor.

The article spawned a number of comments I’ve found typical whenever there is a science story in the news. I’ll post a few here. I would say they are pretty standard.

There is a lot of science hate out there and I think there is a reason for it. Today I will talk about why that is and how I think it can be, rather easily, solved.

The U.S. preeminence in scientific endeavors was probably always overstated but did reach its peak during World War II when many of the greatest minds of Europe and Asia fled to the U.S. They came here to avoid totalitarian regimes who squashed scientific conclusions with which the state did not agree. A notable lesson there.

Being against climate change is something the Republican party has invested in. It’s great to be against something but they have promulgated the idea that scientists are largely on the take for government grants and change results to meet expected ideology. Republicans largely insist that scientists are just “guess makers” who don’t know anything at all. When a scientific theory is proven wrong Republicans attack science, in general, as always being wrong.

Republicans promote what was never a generally accepted theory as being stated as absolute fact. I cannot tell you how often in the comments sections I read, “All the scientists told us there would be an ice age”, “The scientists said there could never be life at hydro-thermal vents in the ocean.” A few scientists said these things and upon peer-reviewed evidence based investigation most scientists determined these predictions inaccurate. And yet in many people’s minds those ideas were promulgated by the majority of scientists. They use it to justify not believing anything a scientist says unless it meets their ideological standards.

This attitude against science is gaining momentum and largely because Republicans leaders and pundits perceive that it will help their party in future elections.

I’m not speaking of those three scientific endeavors specifically, I’m speaking about scientific advancement as a whole and using them as examples.

It’s great to look for evidence that climate change is not caused by human action. It’s great to try to find medical breakthroughs without using stem cells. It’s reasonable to argue that money should be spent in places beside NASA. But, if the facts indicate otherwise, it’s not acceptable to denigrate science because it doesn’t meet with your ideology. To do so is to, and I can’t make this any clearer, hasten the destruction of this great nation.

I don’t ask you to imagine this next thing. I simply ask you to look around. Who has faster internet connections than Americans? Who has more fuel-efficient cars? Faster trains? Better cameras? Cheaper and higher capacity USB drives? Who derives more energy from solar power, wind power? Nations without our natural resources, without our population to draw upon for scientists. Who has the Large Hadron Collider and who has an unfinished pile of junk?

How can we change this trend? It’s so easy, so simple. Follow the facts. If science comes up with an answer you don’t like, smile, shake your head, and say, “I was wrong.”

This is in your hands my intelligent Republican friends. You can sway the opinion of those around you. Other people look up to you, they respect you and your opinion.

Imagine a United States where science is reviled and scientists persecuted. Imagine our position in the world.

Do you want to live there?