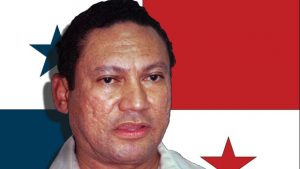 I suspect most people reading this blog will remember Manuel Noriega, who recently died, as a bad guy. A brutal dictator who trafficked in drugs and whom the United States eventually removed from power in Panama. All these things are true but they were all products of our meddling in the affairs of other countries. We created Noriega and the blame for his horrible deeds rests upon our shoulders.

I’d recommend reading the entire Wikipedia article about Noriega to get a full view of his life and our responsibility in all of it. It’s a disturbing story to be sure, but what I want to talk about is the deep-rooted nature of why we interfered and how we continue to pursue the same policies today. How we set ourselves up for long-term failure, and cheerfully do so. Not only cheerfully but vigorously and with absolute confidence we are doing the right thing.

At its center is the idea other nations in this world do not have our best interests at heart. There are theocratic regimes, communist nations, autocratic dictators, and others whose desires are not aligned with our nation. We deal with these sorts of nations in various ways. We spy on them, we support opposition parties with money and military hardware, we sanction them economically, we bomb them, we invade them. Generally speaking, these strategies are applauded by the people of our country. These foreign nations want to hurt us, so we must actively attempt to do the same to them.

Our pursuit of these policies causes tremendous harm. To the people of the nations in question, to our own citizens, and to our ethical reputation. In the case of Noriega, he was considered a powerful United States asset. We paid him huge sums of money and helped him come to power in Panama. In return he funneled money to other insurgents in Central America who were fighting against regimes we did not like. That’s the tangled web we weave when we get involved with people like Noriega.

This involvement with Noriega led us to, at the least, ignore his drug trafficking. There is credible evidence we not only ignored it, but actually took part in the manufacturing and distribution of cocaine because part of the proceeds went to support opposition to regimes we were trying to overthrow.

This is not a one-time outcome. Again and again, the United States has meddled in the affairs of other nations and had it come back to hurt us. We overthrew the Iranian government in 1953. We installed the Shah of Iran, a brutal dictator and much of the terrorism we see in the world is a result of this policy. In our zeal to overthrow the Soviet invasion of Afghanistan we gave the Taliban military hardware. We advised them on tactics. When we wanted to rid ourselves of the Syrian regime of Bashar al-Assad we supported paramilitary organizations that eventually became ISIS.

It can be argued that the entire Mexican drug trafficking organization that brings death and misery to so many is solely tied to a fellow named Miguel Angel Felix Gallerdo. He was heavily backed by the CIA because he helped us against the Sandinista regime in Nicaragua.

What’s amazing about all of these facts is they are well known. The people making policy decisions today understand the failure of all this past meddling. They understand how it caused so much harm. And yet we continue and extend these exact same policies. We support regimes likes those in Saudi Arabia because they ostensibly help us against perceived enemies like Iran. We destroyed the government and nation of Iraq only to see the situation grow worse.

We arm organizations like the Kurds because they are helping us in Syria not recognizing the eventual outcome of all the destabilizing of the region.

We support despotic dictators the world over. We not only allow but partake in the illegal drug trade where it is perceived to be to our benefit. To put it succinctly, we meddle. We meddle, and we keep on meddling despite the fact that it has caused nothing but trouble.

Manuel Noriega is a tangible representation of all that I have written. He is the poster-child for why the United States needs to stay out of the affairs of other nations.

I know those arguing for so-called hardline solutions mean well. I know you hope for the best. I know you consider yourself patriots and want what is good for this nation.

I beseech you, read about Noriega and the horrible results of all our meddling.