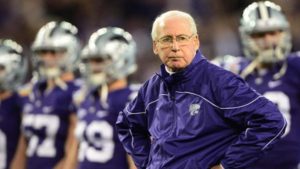 I wrote this blog post and it was accepted by Sport Digest but then Bill Snyder and Kansas State reversed their course and allowed Sutton to leave the school. I still think the article has some merit so I’m posting it here on my own blog anyway. Keep in mind it was written before the announcement to release Sutton from his Athletic Scholarship. Let me know what you think.

A college football player named Corey Sutton wants to leave Kansas State University but Head Coach Bill Snyder is so far not allowing it to happen. Snyder does this by refusing to release Sutton from his athletic scholarship. While Sutton is under scholarship to Kansas State, no other school can offer him financial aid. Sutton cannot afford, or claims not to be able to afford, the price of an education at another university.

Complicating this situation greatly is that Sutton tweeted some pretty nasty things about Snyder, a man who is considered by all who know him to be an outstanding human being. I don’t know much about Sutton but judging by the tweets he seems like a pretty immature young man. Reading the comments on the story it seems Snyder has a great deal of support on this, likely because of his long history of gentlemanly behavior.

I, like many commenting, would tend to give Snyder some benefit of the doubt but I’m afraid I have to side with Sutton, character flaws and all. Particularly after Snyder gave his reasons for refusing to release Sutton. Snyder basically said Sutton is a backup and Snyder can’t let all his backups leave or he won’t have any number twos. He also did something pretty despicable, he tried to justify his decision by telling everyone that Sutton failed two drug tests.

Note, Snyder didn’t tell everyone about the failed tests while Sutton was still playing for and helping the team. He only released the information after Sutton said some pretty awful things about Snyder. I get that, I understand the frustration being called horrible things can do, you want to lash out at the person so doing. But, as the old saying goes, two wrongs don’t make a right. Snyder was way out of line to reveal the failed drug tests.

Snyder also made noise about not wanting to keep Sutton on the team based on the failed tests but being forced to do so by athletic department rules. If that was the case, I’d think he’d jump at the opportunity to get rid of Sutton.

In my opinion, Snyder is wrong, but within his rights, to refuse to release the scholarship. Sutton is not blameless in all of this. He should have announced his intention to depart earlier, leaving Snyder time to bestow the scholarship on a new player, a junior college transfer most likely.

Sutton seems like an immature jerk. I’m not sure why Snyder wants him on the team. Keeping him there can only be a distraction. Perhaps he merely wants to be cruel to Sutton, although this is not in keeping with Snyder’s well-known character.

Honestly, I’m really not sure what is going on. I can say with certainty that it’s a mess.