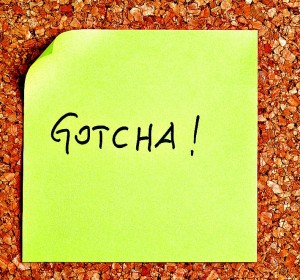 It seems to be a trend among modern politicians to blame journalists for asking “Gotcha” questions. I’ve got news for you politicians. If you don’t know the answer to a question the answer is … I don’t know.

If, in retrospect, you don’t like the answer you gave to the question, the correct reaction isn’t to blame the question or the questioner, the answer is to own up to your awful answer. At least that’s the choice of someone who believes in personal responsibility. But I guess that leaves out just about every politician. They can’t seem to find a limit to the number of people to blame for their own shortcomings.

Have I said stupid things? You bet.

Have I said wrong things? Absolutely.

The classic example is: How often do you beat your spouse?

The answer is simple enough. Never. There is no such thing as a question that can’t be answered as long as you don’t restrain yourself to the questioners paradigm.

The premise of the Gotcha question is that there is no good answer. A tough political question about an obscure leader of a terrorist group. Your answer is, I don’t know. It’s not an answer that politicians want to give but it has the advantage of being the honest reply.

When it turns out the answer you gave to a question doesn’t meet with public approval, tough. Give a better answer next time or stick by your guns if you gave an honest answer.

Anyone who claims the Gotcha excuse, I have no time for you. Good day, sir.

One thought on “There is No Gotcha Question – Just Bad Answers”