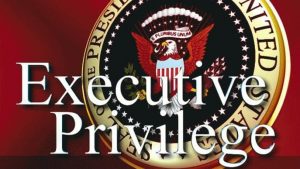 Executive Privilege is a subject of much debate thanks to Attorney General Jeff Session’s sort of thinking about, maybe, kind of, invoking it in regards to testimony about the firing of FBI Director James Comey. I’d like to examine the principle of Executive Privilege as a whole and what it means to a Libertarian like myself.

The first thing we must clearly understand is Executive Privilege is not in the Constitution of the United States. Nope. Not a word. The President and his communications are not immune to oversight from Congress and the Legislative Branch. Both branches can and do have the right to subpoena such information if it is material to their oversight responsibilities.

The next thing we must immediately dispense with is the idea that one political party has a monopoly on using Executive Privilege. The previous three presidents have resorted to this doctrine to cover-up wrongdoing on a scale not seen in the first two-hundred plus years of this nation’s existence. President Bill Clinton used it to attempt to avoid testimony from the Secret Service during the Monica Lewinsky affair. President George W. Bush used it to avoid releasing information about the highly suspicious death of Pat Tillman and the disgusting cover-up that followed. President Barak Obama used it to prevent release of information in regards to the Fast and Furious firearms operation.

Our first president, George Washington, once refused to turn over information regarding negotiations on a treaty with England to the House of Representative believing the Senate alone had oversight responsibilities on ratification of such items. He did turn it over to the Senate.

Thomas Jefferson refused to turn over information relating to Vice President Aaron Burr because it contained sensitive information related to the security of the nation. In my opinion, and that of Chief Justice Warren Burger, Executive Privilege should be used only in the rare cases national security interests are involved. When the investigation or prosecution of a crime is underway, the agency or branch charged with oversight should almost always be able to see those documents, certainly privately and not for public release.

The first time we see Executive Privilege used to hide normal conversations between the president and anyone is when President Andrew Jackson used it in regards to his discussions about the Second Bank of the United States.

President Dwight Eisenhower invoked it in regards to Senator Eugene McCarthy and request of military information regarding communists.

President Nixon used in an attempt to prevent information about the Watergate scandal from getting to into the hands of prosecutors. Then the floodgates opened with Clinton, Bush, Obama, and as we’re seeing President Donald Trump. They are using the idea that any conversation, even if criminal, is privileged.

Point in hand is the current situation. We all know what happened. There is no mystery. Trump wanted to fire Comey. He asked Sessions and Deputy Attorney General Rod Rosenstein to find a reason to do it. His real purpose was discomfort at Comey’s investigation into ties between his administration and Russia. If Sessions knew this was the real purpose, and isn’t saying, he has broken the law. He was recused from the investigation. Therefore, Sessions must go on with the charade that he had no idea that’s why Trump wanted to fire Comey. If he refuses to testify at all, citing Executive Privilege, then he will not be guilty of perjury should hard evidence of the real situation become available. This would end up with Sessions in prison.

Now, finally, as to my point of a view on all of this. As a Libertarian, I’m disturbed by the entire idea of Executive Privilege. If information is pertinent to a criminal investigation I see few reasons it shouldn’t be turned over. I understand national security and secret information must be treated with great care. Such details should be released only to the highest-level officials with oversight authority into the particular case.

What the President of the United States says to his advisors is absolutely my business. I pay all of their salaries. This is my country as much as it is theirs. If they want to talk about something then, as public officials, they must be prepared for that information to be available in a criminal investigation. If a crime has been committed you can’t simply say I won’t talk about it, Executive Privilege. If people can’t see how obviously dangerous that precedent truly is, well, I don’t imagine you should bother reading further.

Executive Privilege is a vile perversion of the very job our elected officials are supposed to be doing. If they commit a crime they must be held accountable for it. If they don’t have to give over information that implicates their criminal activities then what is to stop them from engaging in lawless behavior all the time, other than their conscience? Clearly, nothing.

If our elected officials can commit crimes without oversight, without the ability of law enforcement to conduct investigations, I fear for our nation. Holding elected representatives, all the way to the highest office, accountable for criminal behavior is vital to our national security. Far more important than the privacy of any particular conversation.

I’m virtually certain those who consider themselves supporters of President Trump will think I’m completely wrong about this now but would have totally agreed during the Obama presidency. And, of course, vice versa. That’s another big part of the problem but I’ll leave that alone for today.

Executive Privilege is a crime against the people of the United States. It should largely not exist.

One thought on “What do I think About Executive Privilege?”