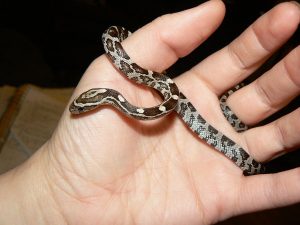 There’s an interesting story dividing Social Media in regards to a woman named Chartelle Geanette St. Laurent who let her one year old child interact with a small Corn Snake. The snake bit the girl who began crying while the mother laughed. The video was then posted to Facebook. Case closed, horrible mother, right? Not so simple.

The small corn snake didn’t have fully developed fangs and was incapable of actually penetrating the skin. In addition, this type of snake is very popular as a pet because of its docile nature and ability to catch and kill rodents. Basically, it’s the kind of snake a child might encounter naturally. In addition, it was incapable of doing any harm to the baby.

I’m not saying it’s the sort of parenting behavior I’d engage in with my non-existent children, I’m just saying the baby was never in the slightest bit of danger and learning to not touch snakes is probably not the worst thing in the world.

The mother excuses her behavior as trying to teach her daughter a lesson but that strikes me as rather disingenuous. She let her other child play with the snake earlier and probably didn’t think much about it one way or the other. Only when she started to get criticized on Facebook did she come up with the excuse she was trying to teach the baby about snakes. I don’t buy that for a second but I also don’t think the woman did all that much wrong.

People let their children play with cats and dogs all the time and those creatures, while domesticated and more accustomed to children, are also far more dangerous. Children are badly bitten by dogs all the time and certainly I was scratched by cats any number of times as a lad. I grew up with both dogs and cats and I don’t remember any specific incident, but I can say I probably pulled a tail too hard and got snapped at or scratched at one point or another when I was an infant.

No one called the government to report my mother for child endangerment. Of course, back then we didn’t have Social Media to make these sorts of things public. Still, I find it hard to believe thirty years ago this would have been a problem. Nowadays we all seem to be of the opinion we know how to raise someone else’s child in the best fashion possible.

Parents should have a pretty wide latitude in the manner in which they raise their children. Certainly, if the baby misbehaved and St. Laurent smacked the baby lightly on the wrist we’d have no one calling child services. I’m totally opposed to corporal punishment but I think parents should have the right to engage in such if they feel it is warranted. It’s not the government’s job to intervene except in extreme situations.

The outcry here is a product of people thinking they know better than anyone else how to conduct their lives. We live in a world in which far too many people want to be judge, jury, and executioner when it comes to other people and their behavior. For the most part, it’s just none of your business.

If St. Laurent allowed her one year old child to play with a rattlesnake and the baby suffered serious wounds then there is a problem. This incident is so harmless that it boggles the mind when you read comments from people who think the child should be taken away by the government. The baby was never in any danger.

Again, I’ll reiterate, I don’t think I’d let such a young child play with a small snake knowing the inevitable outcome. Basically St. Laurent gave her baby something that caused a small, if any, amount of pain. It’s likely the baby was more startled than hurt. If the child learned much of anything it’s probably not to trust anything her mother gives her.

That being said, it’s none of my business and it shouldn’t be yours either.