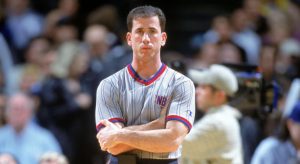 A former referee by the name of Tim Donaghy is claiming NBA executives will instruct league officials to affect the outcome of the fifth game of the NBA Championship series between the Golden State Warriors and the Cleveland Cavaliers.

The reason this topic is getting so much attention is the fourth game of the NBA playoffs saw an inordinate number of fouls called against the Warriors. This triggered a lot of outcry because the Warriors were ahead three games to none against the Cavaliers and many people saw these events as the league ensuring the lucrative series continued past four games.

I find myself quite ambivalent about this subject. While Donaghy was an official in the NBA he wagered on games in which he refereed and cheated in order to win the bets. I played sports all through my youth, and my heart has no room in it for cheating refs. Donaghy is a failed person. I don’t like him and I hate what he did. He betrayed the fans, the league, the players, and the other officials. If he says something I’m inclined to dismiss it out of hand.

On the other hand, I think the NBA has a strong and vested interest in the outcome of every series. There is a huge amount of money at stake. This NBA postseason in particular has not been as lucrative as it could be because the Warriors and Cavaliers won every game they played except one. Each series went only four games except one which went five. Each game generates millions of dollars in revenue. That is a lot of lost cash.

The money the networks pay to the league is recouped with advertising. There is every reason to believe the league itself, the venues, the parking garages around the stadiums, the vendors who sell product to fans, the networks, and countless others hope for a longer series.
It’s impossible to ignore these realities. The officials are well-aware the league would like the series to go on. I think Donaghy is full of himself when he claims the league will order the officials to tilt the game for the Cavaliers, but the reality is the league doesn’t have to give overt instructions. Everyone knows the outcome the league wants. And that everyone includes officials.

The league gives out assignments for the playoffs and the officials chosen for the finals make more money than those who are not. The league can easily make their desires known but they don’t have to do so overtly with specific instructions.

I’m certain Donaghy is a self-promoting jerk and his statement is opportunism at its worst. His declaration impugns the reputation of all the other officials and the league itself. However, I’m convinced the referees understand the league desires a Cavalier victory in game five. I don’t think the officials will overtly cheat but there are plenty of 50/50 calls in every game. This being the case, it’s quite possible for them to tilt the outcome slightly, although unintentionally.

The human eye sees what it wants to see, not what is really there. This is a problem in these situations. There will be calls that are incorrect and each one that goes the Cavaliers’ way invites suspicion.

What is my conclusion? Donaghy is a complete and total jerk. He is factually wrong about league executives giving explicit instructions to referees. But his overall point has merit.

What can be done about it? Nothing. It is what it is.