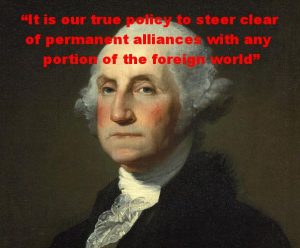 We’ve been warned about foreign entanglements but no one is listening and we haven’t been for a long time.
Recep Erdogan is the President of Turkey and one of the key players in the Middle East. On April 16, 2017, the nation voted Erdogan broad executive powers as the leader of Turkey and replaced the existing Parliamentary System. Shortly thereafter he attacked Kurdish and Syrian forces who are in alliance with U.S. interests.

Turkey is an important ally to the United States in this region. We have a strategically important military base at Incirlik. There are about fifty nuclear weapons stored at that base.

This attack is a message to President Trump although the exact meaning is not easy to decipher. Perhaps it signals a shift in allegiance toward Russia. Certainly, the President of Russia, Vladimir Putin, well understands the strategic importance of Turkey and has been working to improve relations between the two countries.

Turkey has a long and violent history with its Kurdish population. The Kurds strongly desire independence from Turkey, and other neighboring countries, where their population primarily resides. These Kurdish forces, the YPG, have been some of the most effective fighters against ISIS in the region and the United States has backed them to some degree.

That they desire their own nation is without question. This territory would come primarily from lands claimed by Iraq, Syria, Iran and Turkey. If these forces are successful in destroying ISIS they will certainly annex at least some of the territory so captured. This is something that Erdogan must consider in his own policies. The Kurds currently have a government in northern Iran largely independent of that country.

Turkey doesn’t like ISIS but they don’t like the YPG either, this despite the fact that the Kurds have been effectively leading the fight against the Islamic State. President Assad of Syria is an ally of the YPG as they help him with the Syrian rebels.

To say the issues are complex is to put it mildly.

What message is Erdogan sending when he bombs United States allies? It’s impossible to say but I do think of George Washington and his advice about foreign entanglements. Foreign nations have their own best interest in mind in regards to policy decisions. Whether said nation is an ally or an enemy, the leaders are not doing what is in the best interest of the United States. The leaders are making decisions that will best position their own nations.

Washington reminded us in his Farewell Address to avoid foreign entanglements for many of the reasons that are on stark display in the Syrian Civil War. We’ve seen this so many times before. We supported the Taliban in Afghanistan because they were fighting our enemies. We essentially overthrew the democratically elected government of Iran in 1953 and we’ve been embroiled in that mess ever since.

Will we never learn?

The situation in Syria is incredibly complex with any number of factions allying or fighting one another from one moment to the next. Any force we back today could well be our enemy tomorrow.

A strange game. The only winning move is not to play. How about a nice game of chess?

One thought on “Turkey and the Dangers of Foreign Entanglements”