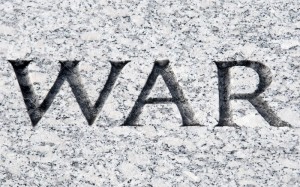 I recently read a comment written in response to an article about Robert Gates that got me thinking. What is the nature of a word? Why do we use one word instead of another? Does it make that much of a difference?

In WW ll we did not have a Secretary of Defense, DOD or JCS was the comment. Department of Defense and Joint Chiefs of Staff are the acronyms referenced in the comment.

The comment is true in a literal sense but largely false. Up until after World War II the Secretary of Defense was called the Secretary of War and the Department of Defense was the Department of War. From a Libertarian perspective I think that sums up something that has gone wrong with the United States of America. Our government, at its very heart, uses the word Defense instead of the word War.

There was a time when this nation was a small country, largely incapable of carrying out aggressive war. We lived in fear of invasion from Britain and potentially other nations as well. We were almost solely concerned with defending our shores. But somehow even then we knew that War was war and Defense was defense. Congress created the Department of War in 1789.

What does the word Defense conjure in your mind? To me it is a woman being attacked and using her martial skill to fend off the assault. I imagine most people conjure up a similar image when they hear that word.

What does the word War conjure in your mind? For me it is horrors. It is death, maiming, good people without limbs, stinking bodies. I would guess for many the same images come to mind.

So what does it tell us that in 1947 Congress passed legislation called the National Security Act of 1947 which reorganized the department but also made the subtle name change?

And yet the word Defense is used with ever greater frequency and the need to strengthen it stressed by our politicians. Not only strengthen it but do so at the expense of our basic freedoms.

I say we should call things what they are. War is war. When our political leaders send young men and women off to foreign countries to kill and be killed, to maim and be maimed, maybe they should have images of war in their minds, not pictures of defense. They might hesitate before committing troops to situations in which the United States has nothing to gain.

Maybe I’m wrong. Maybe a name doesn’t mean that much.