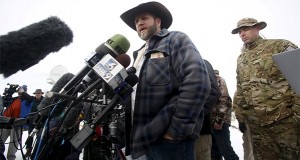 My friends have been urging me to write a post about the Occupation of the Malheur National Wildlife Refuge, the Oregon Standoff, for quite some time and I’m finally going to wade in.

I suspect those who have been urging me, on both sides of the issue, and everyone else will find plenty to be angry with me about. There is so much blame to go around almost no one escapes unscathed.

There are a number of people and rules to blame for this situation and it starts with Steve Hammond.

He and his friends killed a herd of deer that was on Bureau of Land Management property. An event that was witnessed by hunters in the area. Knowing this was a crime and wanting to cover up the evidence, Hammond and his friends then set fire to the entire area recklessly endangering the lives of anyone who happened to be there. Couples canoodling under the stars, hunters, kids camping, hikers, bikers, or anyone else.

Hammond is lucky nobody died or he would have been facing negligent homicide charges instead of arson. He should have admitted to killing the deer and paid the fine, that would have been the end of it. Setting those fires was reckless to the extreme and he has only himself to blame.

The next culprit? Minimum Sentencing guidelines. I wrote an entire blog about why I so hate these guidelines. The minimum sentence for arson on public lands is five years. It’s ridiculous that judges cannot decide for themselves the circumstances of the case. Yes, Hammond was reckless. But he did not commit arson to damage property, to collect insurance, or even to hurt anyone. He was stupid but not malicious.

When he was found guilty of arson, Judge Michael Robert Hogan showed the only bit of sense in this entire episode. He realized five years was too long and shortened to one year and one day the sentence for Steve Hammond and imposed a fine. This triggered an Appeal process and the original order from Hogan was thrown out and the mandatory five-years reinstated. Hammond fought it all the way to the Supreme Court which ruled against him in 2015, not even agreeing to hear the case. This means there were not at least four Justices who thought the issue worth examining.

The problem here is that the Justices most likely to sympathize with the Hammonds, the Conservative Wing of the Supreme Court (Scalia, Roberts, Thomas, and Alito), are those that most strongly support minimum sentence guidelines. So, they’re not going to jump in to do something about this miscarriage of justice.

At that time Steve Hammond reported for prison and paid the remaining outstanding fines.

Now more blame. Ammon Bundy along with a group of followers decided they wanted to use the Hammond case as an excuse to launch their own protest. The Hammonds themselves wanted nothing to do with them. Here’s a couple of quotes from the Hammonds.

Their attorney: neither Ammon Bundy nor anyone within his group/organization speak for the Hammond family.

Dwight Hammond’s (the other man sentenced) wife: I don’t really know the purpose of the guys who are out there.

Okay, Bundy, you’ve got a cause. Great. Don’t leap onto to someone else’s problem and claim it as your own when they don’t even want you! You’ve got a problem, stand up for yourself! Don’t pretend to be helping someone else. It’s dishonest bullpoop! The idiots that joined him are using Bundy just as much as he’s using Hammond, they’ve got a whole cartload of their own issues. Find your own grievance and if people don’t support you, then that’s your fault for not getting your message across!

My next target in this situation? All those supposed Hammond supporters who are angry. I get that, but I’m pissed that they are claiming Hammond was retried for the same crime because “the government” didn’t like the first outcome. This is completely false and seems to say that once a case is adjudicated there should be no appeals process. They also don’t seem to understand that Bundy doesn’t care anything about Hammond, Bundy is just using the case for his own ends.

The Appeals process is a good thing. Let’s imagine judge Hogan was a real tough judge and sentenced Hammond not to one year and a day but to twenty years. By the logic employed by his supporters he shouldn’t be able to appeal. Once it’s done, it’s done.

Another example would be if a drug trafficker was given a very short sentence compared to the minimum guidelines. I guarantee you that all those people angry about the Hammond extension wouldn’t have a word to say if the Appeals court slapped more years onto the drug-dealer’s sentence. It’s selective logic and it’s wrong.

The Appeals system is largely a good one. When a judge or jury makes a decision, it should be reviewable at a higher level, all the way to the Supreme Court. In the case of the Hammond conviction I’m of the opinion that the government should not have appealed the original sensible decision of Judge Hogan, my only hero in this mess. The government foolishly took it as far as they could to make a point. That showed no sense and led to the Bundy situation.

So, let’s sum this entire mess up. A moron lights fires all over to cover up a relatively minor crime. A bunch more morons, our judicial system, end up putting him in jail for way too long. A third group of morons pretends to take on the first moron’s problems when they’re just idiots with their own separate agenda. And finally, just about everyone arguing for the long sentence or against doesn’t have a clue as to what they are talking about!!

Go it? You’re all morons. Except you Judge Hogan. You can come to St. Louis and I’ll buy you some good Kentucky sipping whiskey any time.

Did I miss insulting anyone? Yes? Well, you’re an idiot also.

3 thoughts on “Oregon Standoff – Lots of Blame to Go Around”