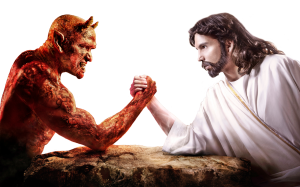 I was watching a video from the Amazing Atheist on YouTube just now, he’s rather humorous although a bit free with the profanities for my taste, when something he said caught my attention.

In the video he is railing against a True Believer, we’re not really sure if Christian or Muslim. The person accused him of not being an Atheist but being a Satanist. It’s a ridiculous comparison of course. Anyone who is an Atheist believes the chance the devil is down in hell is equal to that of god being up in heaven, that being no chance at all.

That wasn’t what struck me though. I suddenly asked myself a question. What if all Atheists started to proclaim their non-belief in the devil rather than their non-belief in god? Would that make a difference to the religious community? Certainly Judaism has no devil at all so they might actually consider it an acceptable idea but what about the Christians and the Muslims?

Would they be happier if we Atheists went around railing against the stupidity of the devil? How worship and/or fear of such an imaginary creature is irrational. What if Atheists marched with “There is no Satan” banners? If they said things like, “Hiding from your imaginary devil friend again?”

Still, the image of Atheists parading around with anti-devil signs made me laugh a little. It’s all the same to an Atheist after all. Why not?