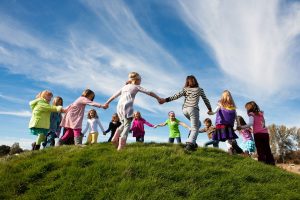 *Small Correction, the girls were his daughters, not nieces*

I just read a Dear Abby question in which a young woman was upset by a man who had a picture taken with his six and two year old daughters who were topless. He posted the photo on his Facebook page. The letter writer claimed to be concerned that pedophiles might now have access to the pictures although it seemed clear to me that she thought a man posting a photo with topless young girls was somehow wrong.

Abby replied that the writer should talk to other relatives about approaching the man and telling him what he did was inadvisable. What? What? What?

I am unaware of evidence that pedophiles browse the internet looking for victims. Every case I’ve ever heard about involved a pedophile exploiting a young boy or girl who they were in contact with in their daily affairs. A neighbor, a family member, a member of the church, or something of that nature.

That’s not really my point here. My point is that if we make taking a non-sexual, family, friendly, fun, picture with a couple of topless young girls a sexual thing, we are feeding the idea that girls of that age should be viewed as sexual. They shouldn’t. Girls and boys of that age running around topless is not sexual. It is simply girls and boys running around topless. Little kids used to be allowed to run around naked all the time and nobody much thought anything of it.

I’d like to find a link to prove that point but I’m afraid to do an internet search about naked little kids. That’s a problem! I’m afraid to take pictures of kids at birthday parties. That’s a problem. The problem isn’t the kids. It’s not the uncle, aunt, family friend, mother, father, brother, or sister. It’s a society that allows criminals to guide our behavior.

A person might gamble away all their money. Ban gambling.

A person might get drunk at work. No drinking at work ever.

A person might drink too much soda and get fat. Ban large drinks.

A person might be sexually attracted to a child. Ban pictures of young children.

Responsible people should do what they want and face the consequences if they are irresponsible. They shouldn’t have to modify their behavior because someone else is a criminal or an idiot.

2 thoughts on “Topless Photos of Little Girls a Problem or not?”