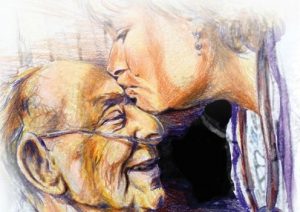 The healthcare debate often focuses on the undeniable fact that people who are in the last year of  life spend a huge amount of money trying to stay alive. This is one of the primary driving forces in the cost of healthcare. While it is true, I find the point being made, and the people making it, quite disturbing.

Someone in their last year of life does not know they are going to die. They want to stay alive. There are plenty of cases where people are given medical care and survive for many years if not decades. When you argue that these people are going to die anyway, just let them, you are engaging in, essentially, murder.

When I read one article or another making this argument it seems to me the person so writing is promoting Death Panels. Basically, a group of people on a panel needs to examine the prognosis of a patient and if it determines the outcome is likely death, withhold treatment.

I would think the vast majority of people would reject this out of hand. And yet I see it suggested in a veiled fashion almost every day. I read an article talking about how people who are very sick are the problem. Again, it’s true that these people use a much larger share of the money designated for healthcare. I don’t pretend it is false. I just don’t like the implication of the argument.

The demographics of our country are absolutely the driving force of the healthcare crisis. We have an aging and increasingly unhealthy population. There is nothing we can do about the passage of time. People get older. We can focus on proper diet and exercise to prevent a huge chunk of our healthcare issues. That’s a problem with a solution. So, why aren’t we doing so? I’ll save that discussion for another day.

I just want you to be aware of what you are really saying when you talk about the last year of a person’s life being a problem. There are those who actually argue for death panels. There are those who think people over a certain age should voluntarily turn themselves into the disintegration chambers. I have a bit of respect for those who so advocate. At least they are being honest about their intentions. Those who lament about the last year of life but pretend they are not proposing Death Panels don’t fool me. I find them disgusting.

I hope we will never reach a point in this country where we value treating sick people less than we value money. I hope people will never feel the need to rid our society of those who they deem less worthy of life. We’ve seen that before, and I’m fully aware that it can happen again.

So, when I see article after article reiterating the problem of people in the last year of their life, I grow concerned. I hope you do as well.