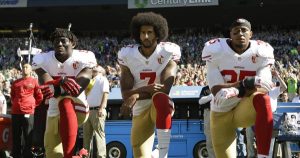 There is an interesting phenomenon going on surrounding the behavior of people during the playing of the national anthem. I don’t want to talk about the reason behind the kneeling but the reaction to the protests.

There are largely two categories of offense in these situations. Either you are affected or you are not. Protestors can act in a way that directly or indirectly affects me, or can perform it in a manner that has no impact on my life. The national anthem protests fall into the latter category. Blocking traffic would be the former. Your reaction to events that don’t affect you is an insight into your character.

The stronger you are as a person the less you should react to affronts that don’t affect you. If you are secure in your patriotism, why would you feel the need to force someone else into an act you deem patriotic? It is your own insecurities that rouse your ire, much more than the protest.

Biblically, Jesus used the idea of love to demonstrate this principle. If you love yourself, you love everyone else. Their feelings toward you are irrelevant, if they hate you that is too bad but it doesn’t change your opinion of them. It is only when you have feelings of doubt and insecurity in yourself that you worry what other people are thinking. Buddha and enlightenment is another example of this principle. The more secure you are in your own opinions, the less you feel it necessary to make others conform to those particular standards.

I’m certainly not criticizing anyone for standing during the national anthem but I do find their rage and urge to punish anyone who does not to be an underlying weakness of character, not a strength. If you really believed in your patriotic stance, you wouldn’t need to coerce others through force, economic or social, to conform to the ideologies you hold dear. You would simply smile and be comfortable in your own behavior. Those who are secure don’t need to be constantly reinforced by others. Those who are weak, who are insecure, require such reassurances.

I’m also not suggesting that such strength is easy to acquire and to demonstrate consistently. I think the ideals proposed by stories of Jesus and Buddha are essentially unobtainable, but still well worth pursuing. Everyone gets a sense of ease from being in a group of like-minded people. It is simply human nature to enjoy such comradery. When I am in a large group of people who share my ideology, I am reassured that I myself must be correct, this is a false comfort. Their agreement, or disagreement, with me has nothing to do with my own opinion.

I don’t hold myself up as a shining example of strength or perfection, but I also feel secure enough in my own beliefs that I don’t attempt to forcefully make people do as I do. I’m a Libertarian and an Atheist but I’m not offended by Democrats or Christians. I make my points as honestly as I can and I leave the decision up to you. If you choose to believe or behave differently than me, so be it. Best of luck to you. This is strength of character.

Not that I’m telling you how to act. That’s your decision, I am suggesting you look at your behavior with an eye toward critical thinking. Trying to force people into conforming to your way of doing things is a sign of tremendous weakness and insecurity, not power.