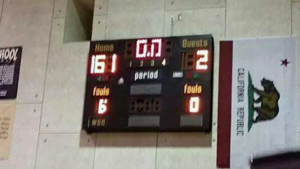 I’m a sports fan and I’ve written about lopsided victories in sporting events before. There’s a new one in the news and this one resulted in the coach of the winning team being given a two game suspension by school administrators.

What I want to talk about today is not the nature of a lopsided loss and the responsibility of the coach of the dominant team. If you want my opinion on that please read my other post on the subject. What I want to talk about today is the general tone in the comments section. There is a sizable percent of people who find the suspension of the coach to be an example of the downfall of the United States. They argue that the point of a game is to win and if your opponent can’t stop you from scoring you shouldn’t stop scoring.

They point to this idea as why the United States is growing weaker in the world. That the proper attitude is to attempt to crush your opponent and that in the good old days of our country no one would have blinked at such a humiliation. They would have told the opposition to get better.

I have some sympathy for this idea in that if you lose a game your reaction should be to attempt to get better. You should work harder and learn from the defeat. However, I completely disagree with the idea that in years past such behavior would have been cheered on and that destroying an obviously inferior opponent was proof of your strength.

It’s my opinion that such behavior is actually proof of your weakness.

I think that previous generations knew that strength came not from humiliating those weaker than you. Strength came from not humiliating them. That a good coach, a strong coach, knows immediately that his team is superior and gives younger players a chance to play. Such a coach does what she or he can to limit the damage and embarrassment. Perhaps this means waiting until the shot clock runs out. Forcing the players to pass a certain number of times before shooting. Putting players in unfamiliar positions. I think there was a time in this country where we were secure enough in ourselves that we didn’t need to prove it with ostentatious displays.

There was a time when winning wasn’t everything. When sportsmanship ruled. We still applaud sportsmanship when we see it. Contrary to what Charlie Sheen and most of the United States seems to think anymore, life shouldn’t be measured in wins and losses. I think truly strong people understand that and in generations past a life was not so judged. Integrity, honor, courage, kindness, generosity. These were words we used to measure a life. Not some sort of count of wins or of money accumulated.

Those days appear to be gone. Now the more massive the victory and the more we destroy and humiliate our opponent the better we somehow feel about ourselves. It’s not my job to worry about the other guy seems to be the message. If you’re looking for a reason our country is becoming weaker, then look no further than our vainglory.

I’m not saying it’s wrong to win. It’s great to win the game, to give your best effort, to defeat a worthy opponent. I’m just saying there is no strength or glory in defeating those who cannot compete against you.

One thought on “162 – 2 Basketball Game Suspension for Coach – What does it Mean?”