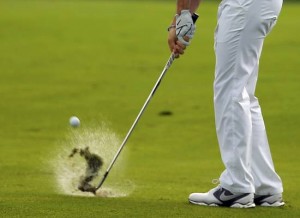 This past weekend there was a very interesting situation in the 2014 PGA Golf Championship involving both Rory McIlroy and the rules of golf in general. The tournament at Valhalla Golf Club was plagued by inclement weather in the shape of rain, lots of rain. This played a major factor in a number of rules decision that both the players and fans of golf are questioning.

The major rules issue occurred because a long rain delay brought on the possibility that the last players on the course would not be able to finish their round. This was particularly important because the leader of the tournament on the 18th tee was in that last group. If McIlroy was unable to finish his round because of darkness he would have had to come back the next day and finish at that time.

The course officials allowed McIlroy and his partner to hit their balls before they would normally be allowed to do so. In this case when the two players in front of them were still playing the hole. In order for this to occur the players in the leading group must agree to allow it to happen. According to the players in the leading group they agreed on the tee shot of the trailing group but not the approach shot. There are some contradictory statements coming from rules officials who say the leading players did allow the second shot.

There was also a general issue of the course being extremely wet and muddy. This meant the players were often in what is called standing water and their balls were muddy making them difficult to control. There are several rules to deal with these situations.

In some cases players are allowed to play “preferred lies” where they pick up the ball after each shot, clean it, and place it close to its original position. A second rule covers two other situation. Players are allowed to move a ball that is in standing water to a drier area and drop it. In some cases the entire fairway was standing water and players had to move a fairly good distance to find a playable position. A clause of this rule involves balls embedded in the ground, in this case the rain soaked ground.under those conditions players are allowed to pick up, clean, and drop it nearby. This led to a situation where players were hoping for a plugged ball because it allowed them to clean it whereas a muddy ball just had to be played. It’s a huge disadvantage to play a muddy ball.

According to other players some rules were bent to attempt to get the round finished under very wet conditions.

What I want to talk about is why the PGA felt it so necessary to bend, if not break, rules to get the round finished. There were many people at the course on Sunday who would not be able to return on Monday but I suspect the real reason was that the number television viewers for a Monday round would ever equal those for a Sunday finish. Advertisers paid for Sunday time slots, not Monday time slots.

The rain was coming down extremely hard and the course was barely playable at best. If the tournament had not been so prestigious with so much television interest I strongly suspect they would have simply cancelled the round altogether. The conditions on Saturday were awful and got progressively worse on Sunday.

I think it’s pretty safe to say that the PGA was under pressure from the networks to get that round finished, and they did. I think it’s also safe to say that fifty years ago when television money did not rule golf that the round itself would have been cancelled. There is big money in golf by the way. McIlroy got a paycheck of $1.8 million for his eventual victory.

I’m sympathetic to the PGA in some ways. The people paying the bills wanted the round finished. I’m also rather dismayed by their willingness to twist the rules to their advantage. The course itself also suffered serious damage from spectator and players.

However, I’m no shrinking violet when it comes to blogging so I’ll tell you what I think. I think they should have cancelled the round after the big rain. It might have cost them some money but it was the right thing to do, at least I think so. The best player probably won but we will never really know because of the various issues. Would McIlroy have played his second shot differently if he knew the results of the leading group? Did the very dark conditions on the last few holes alter scores for those players who had to deal with it? Did players gain advantages from rules decision involving embedded balls and standing water?

It’s not just about who won the tournament but who finished in 10th place. The decision to play was unfair to the players. The spectators probably were better served by getting to watch the tournament conclude but who knows what excitement might have occurred on a Monday finish?

I understand the influence of money and it’s not all bad. Good things come from major sponsors and the players earn a lot more money now than they did thirty years ago. I’m not saying that the PGA was wrong, just that I think they were wrong.