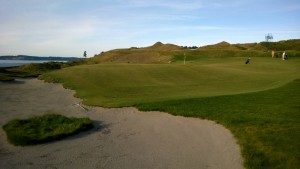 There’s a lot of controversy going on in the golf world over the course where the U.S. Open Championship is being held, Chambers Bay.

The course is quite unusual in that the climate and location make it impossible to have a typically well manicured course. Chambers Bay is messy looking. The greens are bumpy. The greens and fairways have huge hills and mounds that quite frequently make it look more like a tricked up miniature golf course than the site of the U.S. Open.

A round of a golf for an average Joe or Jane looking to play can cost upwards of $300, not including taxes and mandatory caddie payment, depending on time of year and state residence status. This is an issue because the state of golf in the United States is quite poor in many ways. The idea being that as fewer people play golf there are fewer courses and only the wealthy can play. As more courses like Chambers Bay are built this exacerbates the problem. Young people are largely not taking up golf.

Some people hate the course.

Many golfers are taking the professional attitude and saying it’s the same course for everyone, it’s very challenging, and they look forward to playing. I’m largely in agreement with these players. The course is what it is and everyone is playing the same course. In this case the course gets considerably more difficult as the day goes on, the wind sweeps in, and things dry out.

In the first two rounds most of the best scores came in the morning round. I wouldn’t be surprised to a see a winner on Sunday come from four or five strokes off the pace from near the middle of the pack. This in effect punishes players who are leading after three rounds. I could, of course, be wrong. Someone might well win the tournament after being the third round leader. I’m just suggesting the odds are more heavily against it than normal.

The greens are, in many ways, comical.

Chambers Bay is a difficult course for live spectators to see the event. The many hills block the view of the course.

I don’t think there is a right answer here. Chambers Bay is certainly unusual. It is certainly expensive. It is certainly a poor venue to watch the event in person. It favors players who have an early tee-time. However, some people enjoy watching the ball rolling and rolling down a hill and into a bunker. They enjoy wild putts that go in five directions.

In the end the winner will be the person who plays best those four days. Is it good for golf? Bad for golf? It probably doesn’t matter all that much. Golf is in a decline because of the expense and amount of time it takes to play the game. It’s good that people are considering these issues and trying to come up with a plan to help golf attract younger players.

In other words, everyone is entitled to their point of view and in this case, both sides are valid. Sometimes that’s just the way it is.