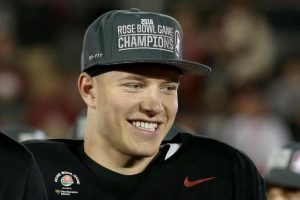 There’s a big story in the sports world and it’s generating a lot of passion on both sides of the proverbial ball. One of the top college running backs, Christian McCaffrey of Stanford, has decided not to play in the Sun Bowl. People seem to be of two minds and both express their point of view with vigor.

One side seems to think that McCaffrey has betrayed his teammates, his fans, his coaches, and the people who will attend the game, for which he was a star attraction. The other expresses the idea that a large payday awaits him in the NFL and avoiding injury in the game could potentially save him a lot of money. I think both sides have their merits but what I’d like to discuss first is the reason McCaffrey has chosen this course of action.

The root of the issue is certainly money. Many players have been injured in such games in the past, this is fact. The position you are drafted when entering the NFL greatly effects the amount of money you make. A first five picks gets a contract worth approximately $8 million more than someone taken eight picks later. That’s a lot of money. That’s what is driving McCaffrey’s decision. If he gets even modestly hurt at the Sun Bowl he could easily drop that many places in the draft. If severely hurt it could be much more.

McCaffrey is enumerated nothing for his participation in the Sun Bowl which pays the participating schools over $4 million. That money comes from television contracts, ticket sales, sponsorship, and other sources. During the week of the game players for both sides will participate in many events which generate money for various establishments in the region. They will sit at tables where people have paid large amounts to be seated near them. They will sign memorabilia that is auctioned for more money. They will be paid nothing for all of this.

This stark contrast in the amount of money McCaffrey gets at college as compared to what he gets after college drives his decision; for good or ill. We cannot ignore the reality of the world. Whether we like these facts or not is irrelevant. Perhaps we think professional players get too much money. Maybe we think college players should get more.

I am not in disagreement with either side of this debate. Leaving his teammates, coaches, and fans without his services in this final game is not a nice thing to do. Risking $8 million or more to play in a game that gives you nothing except potentially negatives consequences seems like a darned bad idea.

What I know as a Libertarian is that McCaffrey is the one who gets to make the decision. Not me. He should do what is best for him. As should we all.

I leave with a final poll. Think about it for a moment before answering.