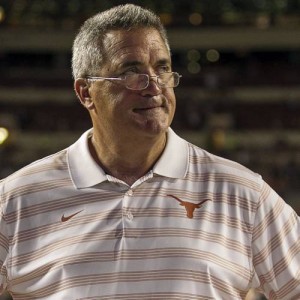 I just found out about a situation that’s been brewing in NCAA football for a while now. For once it’s not about screwing over the players, everyone’s favorite whipping boys. This time it’s about a coach.

A fellow by the name of Joe Wickline worked for Oklahoma State as an offensive coach. In that capacity he advised the head coach and the offensive coordinator on what plays to run but did not make the final call. The nonsensical question the court faces is whether Wickline is calling plays for his new school, the University of Texas. Why is this such a crucial question? Because of insane employer contracts.

You see, Wickline was only allowed to leave Oklahoma State without paying a $600,000 penalty if he took a promotion at his new school. If the move was lateral, or technically a demotion, then he would be forced to pay the penalty. Insanity. I will never understand how a business can penalize an employee in the United States of America for taking another job. It’s our right to work where want and when we want as long as an employer is willing to pay us. No one should have any say about that except me and the person who wants to hire me. If I steal company ideas or clients that’s another matter but if I simply want to move from one company to another it’s completely and totally my decision.

You might wonder the point of the clause in the contact. I’ll tell you. It’s a nasty, and in my opinion clearly illegal, way to make other schools pay when they hire someone who works for the first school. In the article I’ve linked the lawyers for Oklahoma State lament the fact that Texas is not paying the fee because everyone does it! Madness. It puts a huge chill on the ability of any employee to actively sell their services. If a potential employer has two candidates but one comes with a half a million dollar fee associated with him or her that clearly effects hiring practices. How this is not illegal mystifies me.

Shame on the anyone who writes such a contract. Shame on any judge who upholds it. Capitalism depends on people being able to sell their services to the highest bidder. It’s not just about making an environment where competition thrives and government doesn’t stifle it. It’s not just for the company, it’s all about the employee as well. Contracts like this stifle capitalism and the free market.

In the immortal words of Mr. Mackey, “m’kay?”