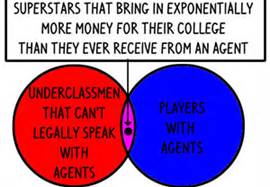 The nuns kicked Maria out of the abbey because she wasn’t an asset. What do we do when the bosses are the problem? That’s the NCAA for you.

For those of you not aware of the facts of the matter, the NCAA runs a big business. The business of college sports. Here’s the page for their Enforcement Arm. It’s filled with gems like Commitment to fair play is a bedrock principle of the NCAA, and The enforcement program is dedicated to creating positive student-athlete experiences by preserving the integrity of the enterprise.

This blogger is committed to calling lying sacks of garbage … wait for it … lying sacks of garbage. They are in it for the money. There is lots of money in college sports for everyone except the men and women providing the entertainment that generates all that money. The do get to go to college for free which is not a bad compensation for many of them. A four-year stint at Duke costs about $200,000.

Not bad although the head coach at Duke earns $1.7 million per year. That’s the football coach. The hoops coach, try $4.7 million. The university itself pulled in a cool $67 million in 2008 thanks to its athletic department. Athletic departments pull in huge amounts of money through television rights, game-day tickets, post-season play, jersey sales, and various other arms of fund-raising. NCAA sports is big business and the regulation arm of the NCAA is primarily concerned with keeping that revenue stream healthy, not creating positive student-athlete experiences. By the way, the term student-athlete was created by the NCAA as a legal dodge.

It’s hard to blame them. People willingly offer up their hard-earned money to wear jerseys of their favorite players, see the game, and watch it on the streaming device of their choice. College serves as a free farm system for the NBA, the NFL, NHL, and increasingly MLB. It’s a place for the stars of the game to hone their skills before the payout finally comes in professional sports. You see, the NCAA runs an amateur organization where the players aren’t tainted by being paid, conveniently forgetting that a scholarship is a form of payment. Tuition, room and board, books, no charge, but that’s not payment because we value the purity of the sport, don’t you see the difference?

The NCAA punishes players who sell game-day jerseys worn in the big game. Kids who want a little money because they aren’t allowed to have jobs while on scholarships. Kids who aren’t allowed to talk to lawyers who could actually offer them some pretty sound financial advice, lawyers called agents. Really, they can’t talk to a lawyer to advise them about their future? Can’t talk to a lawyer!? Seriously? Accused criminals are reminded they have that right. College athletes, nope, rules violation. The team gets endorsement dollars for wearing sneakers, by the team I mean the coach and the university, certainly not the players. Video games of NCAA sports, primarily football and basketball, can’t put the player names on the back of the jersey, any guess why? Is it a commitment to fair play?

Sports is a strange beast. The draft? Yeah, that’s clearly unconstitutional. That’s not the topic today but boy, once I get started with the madness of sports I can’t stop myself. National Letters of intent that legally bind a seventeen year old to one, and only one, university or he has to forfeit a year from his scholarship? It’s all about money. It’s about collusion, the suppression of constitutional rights in the pursuit of money.

I went to the college of my choice. I could have transferred anytime I wanted. I got a job at the company that offered me the best deal. They didn’t draft me and lock me into a preset dollar amount based on the position of the pick.

What do we do? How do we solve this problem? With this much money at stake it’s not an easy solution. I doubt there is a complete solution that is viable for all parties. That being said the travesty of justice that is coaches, athletic directors, university presidents, announcers and all the rest making millions and the athletes getting a scholarship angers my Libertarian principles. Don’t kid yourself, there are thousands of broken kids, used up in college sports, who never make the pros, tens of thousands of them. They got a college education which isn’t bad, but it’s not fair compensation compared to the money they generate for other people. It’s just not.

Tomorrow I’ll offer some ideas on how to right this wrong. It won’t be ground-breaking. They are all ideas that have been vetted many times. See you then.

Tom Liberman
Sword and Sorcery novels with a Libertarian Twist
Current Release: The Sword of Water ($2.99 a bargain for 300+ pages)
Next Release: The Spear of the Hunt

2 thoughts on “How do you Solve a Problem like … the NCAA?”