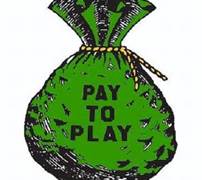 There are many reasonable arguments why opening college athletes to direct pay in the form of professional sports is not the best idea. The open competition would create an unsavory atmosphere. College coaches would be bidding for the services of their players and something akin to a draft would be required eventually. That or splitting college athletics into pay and no-pay divisions. The student-athletes would be just athletes with no pretense at going to school. Without  scholarships the athletes for sports other than basketball and football would vanish.

There are a number of proposed methods of paying the players for their services and avoiding these dangers. A system like minor league baseball is one idea. A lump sum payment at the start of their college career is another idea.

I think something akin to a 401(k) is the best solution. Money is put into a fund for each year the student stays in the system. This money is untouchable until the student finishes their eligibility or leaves school. Students in the sports that generate the most money, men’s football and men’s basketball, would be slotted for higher payments while less financially lucrative sports would get smaller amounts or simply the scholarship they currently receive.

The money allotted could be drawn from both the money raised by the school and by the NCAA as a whole. Television contracts, jersey endorsements, ticket sales, etc. I think it would be best if the money was the same for all schools in the same division and sport. Thus Division I men’s basketball players would be slotted a certain amount. This avoids an imbalance where higher paying schools attract better recruits.

A percentage of this money from the NCAA and the schools would be lumped into a fund and divided by the number of players in that sport, with Division I men basketball and football players getting the lion’s share. As an example, there are 13 men on each of the 340 Division I basketball schools giving us a total of 4,420 players. Let’s say we put away $50 million for the players. That’s about $11,000 or so for each player for each year in the league. It’s not a massive amount but it’s not horrible and it’s better than nothing. Personally I think the $50 million is a very low figure.

I think it likely that we would have to redefine the Divisions based on revenue raised. Something akin to the European soccer relegation rules where if a team doesn’t make enough in television revenue and ticket sales they are reduced to the next lowest division. Schools that had no interest in participating in such a scheme, such as the Ivy League, could opt-out in a non-payment division.

It’s not a perfect scheme and there are pitfalls that I’m sure my readers can find but I think it is far more equitable than the current shameful system.

Tom Liberman
Sword and Sorcery fantasy with a Libertarian Twist
Current Release: The Sword of Water ($2.99 for 300+ pages of adventure, excitement, and fun)
Next Release: The Spear of the Hunt

3 thoughts on “NCAA Provides Riches for Almost Everyone”