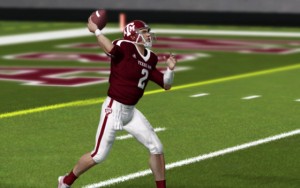 I’ve written a number of times about how I think the NCAA is an organization wherein everyone except the athletes make money. One of the points I’ve made is that the NCAA takes money from video game makers like Electronic Arts who use the likeness and mannerisms of players in their games. Until today the NCAA and the game manufacturers have never paid the players a penny for doing this. Until today.

If you purchase EA NCAA Football 2013 and load up, say the Texas A&M v. Missouri game you’ll see #2 leading the Aggies onto the field. The avatar bears a striking resemblance to Johnny Manziel. In the game #2 throws with his right hand and is a bit short for a quarterback. He runs a lot. He plays just like Johnny Manziel. The only real difference is the back of the jersey where you see just the #2, not the name Manziel.

The reason you didn’t see that name is because the video game companies figured if they left it off they wouldn’t owe Manziel, or any of the other players, money for using their likeness in the games. Those self-same video game companies do have pay to someone though, that someone is the NCAA. In fancy legalese designed to keep them from having to give money to the actual players they pay for the right to use the NCAA logo. Tricky, those lawyers. The NCAA has said they will terminate this agreement with the game manufactures once the current contract expires later this year.

Those who disagree with me will argue that the players get a scholarship and signed a contract in which they agreed not to collect money for the use of their likeness. If that is the case then why did EA and the NCAA just agree to pay $60 million to the people whose likeness was used from 2005 or 2003 to the present time. They fought and fought until the moment the case was headed to trial and then paid up.

There is another huge case on the dockets now filed by former UCLA basketball star Ed O’Bannion and there has been no settlement to date. That case argues the players have the right to sell their likeness directly to the video game makers. It’s a big one to say the least and I’ll be keeping my eye on it. But it’s not the point of today’s column.

Those who rail against today’s settlement argue that it will “ruin” college football. It will drive the game out of existence. I can’t categorically say this is wrong although I’m certain that it is incorrect. There is money to be made. Lots of money. If the NCAA, the media, the stadium builders, the broadcasters, the coaches, and everyone else has to give up a bit of that to pay the players they’ll do it. They might not like it, but they’ll do it. And the games will go on.

Either the doomsayers or right or I’m right. Time will tell.

As far as today’s settlement goes I have only this to say. About time.