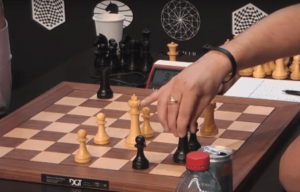 There was an absolutely fascinating incident at the 2016 Candidates Chess Tournament being held in Moscow, Russia. The top U.S. player in the world, Hikaru Nakamura, touched his king but decided against moving it.

There is a rule in chess that if you touch a particular piece you must then move that piece to another square as your next move. The rule is clear. You can adjust your piece without intending to move it, if you tell your opponent of your intention beforehand. This rule is well-known by all the players at such a prestigious tournament and was one of the first rules of chess taught to me when I was a child.

It happened at a crucial moment in the game and Nakamura touched a piece that if moved would almost certainly cause him to lose the game. He had to move another piece in order to achieve a draw.

It’s not so much the incident that I find fascinating as its immediate aftermath. Nakamura’s opponent, Levon Aronian, immediately called Nakamura on the touch. Nakamura’s reaction was just as quick. He claimed that he was adjusting the piece. Aronian didn’t believe it for a moment and called over an arbitrator who agreed with the Armenian. Nakamura then had to move the king, did so, and soon after lost the game.

It is clear from the video that Nakamura was in no way adjusting the piece. He grabbed it in order to move it and then realized his error.

However, since that moment he has been exceptionally reasonable, fair, and completely without rancor (skip to about 1:30) toward Aronian and the arbiter. He has spoken about it with reporters openly. And I, for one, find that enormously admirable.

Nakamura could easily have carried a lot of bitterness and defended his position until the bitter end but chose a different and better path. There are many of us, I won’t hesitate to say most of us, who would not be so generously inclined. We would be bitter, angry, we would probably convince ourselves that we were actually adjusting the piece, that we had been wronged.

I get that people will find his initial reaction bothersome but I’m willing to forgive him that because of the immediacy of the situation in the heat of the moment. I find his behavior after the fact to be a far more important indicator of his character.

Good on you, Hikaru!

For full disclosure, Nakamura is a member at the St. Louis Chess club to which I belong but I don’t think that’s influencing my opinion.

2 thoughts on “J’adoube and Hikaru Nakamura”