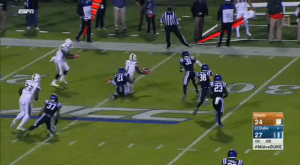 There was an interesting football game this weekend between the University of Miami, The U, and Duke. The final play of the game was a multiple lateral affair where the Miami players threw it back again and again and eventually scored a touchdown.

There was also a missed penalty on Miami for an illegal block and Miami players ran onto the field before the play was over. Penalties cannot be reviewed and even if penalized for being on the field early, the touchdown would have counted with the penalty being assessed after the play. So neither of those two things rise to the level of the first issue, the knee being down.

As rules now stand, you cannot overrule events after they have been officially declared. Let’s say the Miami player’s knee was down with one second still on the clock, who is to say that Miami wouldn’t have scored on the next play. Therefore I think it’s generally perfectly correct to refuse to overturn a bad call the next day. This was a very unusual situation in that if the call is made correctly, the Miami player is down, the game is over, and Duke wins. There is no further chance for Miami because there is no time on the clock.

The NCAA has suspended both the referees and the replay officials for two future games but they will not award Duke the victory.

I’m of the opinion the circumstances in this case are enough to overturn the win. The player’s knee was down and that would have ended the game with no chance for Miami to score.

I see the other point of view as well in that overturning a game after the fact is fairly drastic. I just don’t think doing it this time would set much of a precedent for doing it frequently. It’s such a rare thing for a game to absolutely end on a bad call. Therefore if I was King of the World, Duke would be declared the winner.