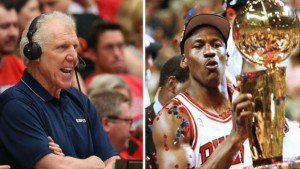 I woke up this morning to find an no-brainer addition to my misleading headline of the week collection.

Bill Walton thinks Michael Jordan was just an Average Athlete blare the headlines from stories across the sporting world.

Anyone who follows basketball knows that Jordan is arguably the greatest player in the history of the National Basketball Association (NBA). There are those who will argue for Magic Johnson, Larry Bird, Oscar Robertson, Lebron James, Bob Cousy and others but no one would exclude Jordan from the conversation. He was great, not average, and no one, including Walton, thinks otherwise.

Walton is saying that what made Jordan great was not his athletic ability but his desire to win, his preparation, his ability to elevate those around him, and stamina earned through a tremendous practice ethic. Jordan was 6′ 6″ tall which is not particular large for the position he played in the NBA. He was not the sort to physically push anyone around in comparison to those around him. I think Walton more than pushes the point that Jordan was average but it’s also clear that Jordan was not a dominant physical player. He had good speed and very strong jumping ability but that was not the heart of his game.

Walton has it right. What made Jordan great were other things. His mental toughness, his work ethic, and what I consider the absolute key to greatness, making those around you better. It is all but impossible to win championships, Jordan won six in the NBA and one in the NCAA, without such an ability. You must be a team player who gets those around you to reach their maximum potential and Jordan did this with players like Scottie Pippin, Steve Kerr, Horace Grant, John Paxson, and others.

The thing about the headline that is misleading is that it attempts to paint Walton as claiming Jordan was an average player. Walton meant nothing of the sort. He recognizes Jordan’s greatness and attributes it to something besides simple athletic ability. In other words, Walton was giving Jordan a tremendous compliment.

So, there you go.