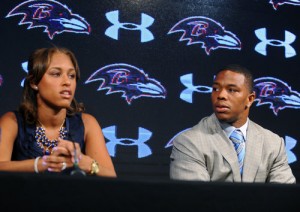 There’s a big controversy going on over Baltimore Ravens running back Ray Rice and I find the situation pretty deplorable for a number of reasons.

For those of you haven’t been following this story it’s pretty grim all the way around. In February of 2014 Rice was accused of punching his fiancé while they were in an elevator at the now closed Revel casino in Atlantic City, NJ. He was arrested and charged with aggravated assault; the result of the case currently pending trial. He has since married the woman.

The NFL has a policy where they will suspend players based on personal conduct even if they are not found guilty in the court of law . Several prominent cases have arisen over the years with the most well known involving Ben Roethlesburger. This policy was implemented for Rice and he was given a two game suspension for the alleged assault. The woman in the case argued for him during the hearing.

Quite a number of people came forward arguing the suspension was far too lenient and that league commissioner Roger Goodell should have imposed a longer penalty.

Months went by. Rice played in his team’s preseason game and was widely cheered during those games.

Then, just a couple of days ago, the video of the incident surface. The league immediately suspended Rice indefinitely and the Ravens released him from the roster.

I’ve got a problem with both of those actions. Both the league and the team were aware of the nature of the crime and the police report pretty much describes events as they happened in the elevator. The only new evidence is the video.

I’m no Rice fan. I thought he should have faced a longer suspension originally but the reality is the league and the team made their bed and want to go back and remake it because the public has seen the video. Rice has not been convicted of any crime at this stage although certainly the video is damning evidence.

My real problem here is that punishment was meted out for the crime. No new crime has been committed. It’s the same crime but the league can now go back and completely change the penalty which was agreed to by all parties? That just strikes me as wrong. I’m not saying new evidence shouldn’t be able to force a change but I just don’t see any new evidence here. The league knew what he did, his then fiancé asked for leniency against him, and a resolution was settled upon.

Was the league wrong in its original penalty? Certainly one can argue that.

Does Rice deserve the harsher penalty? Not an unreasonable conclusion.

I just don’t like this changing of the rules because of public perception. That’s really what is happening here. The crime is the same, the league the same, Rice the same. What has happened is that people are now visually aware of the brutality and the NFL wants to keep its fans. They should have thought of that in the first place!

Frankly, I’m a little skeptical of these personal conduct penalties in the first place. What if it turned out the video showed that Rice accidently slipped, fell and in flailing about hit his fiancé? What if we didn’t find out until after the suspension? What if it turned out she was lying? That’s why we have criminal and civil courts. Once a person is found guilty of a crime I’m more reasonably disposed to a company firing its employee.

I know it won’t be popular but I don’t think Rice should have faced any additional penalties until after the case was decided. I think the NFL and the Ravens were wrong to change the penalty based on the video when they knew the crime all along. Once the legal case is decided I think they will be well within their rights to impose further penalties.