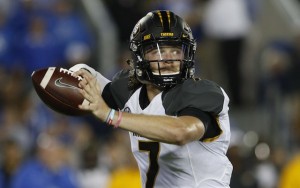 There’s big news hitting the sporting world as the oft-suspended quarterback of the Missouri Tiger football team is facing more problems thanks to a video released of him using cocaine.

Cocaine is currently illegal in the United States and despite my Libertarian philosophy that all drugs should be legal, his actions are criminal in nature. The team has every right to suspend him, or at least that’s the obvious answer.

So why do I find the entire situation hypocritical?

Mauk was suspended earlier in the season. Why? Because of cocaine use. My buddies who know a lot about the situation told me as much months ago. He then returned to the team only to be suspended again after a drunken fight at a bar.

Again, you might well ask me, why are you so outraged at this latest suspension? He has a history. The video clearly shows him using cocaine.

Here’s the problem. When was the video taken? No one knows. There is no evidence that this is new. The reality is the athletic department knew he was using cocaine and suspended him earlier in the season for that reason. This video could easily be from that time period. Frankly, I’d guess it probably is, but that is pure speculation.

But suddenly, because the public gets to see what the athletic department knew all along, the suspension gets longer? Becomes indefinite? That’s garbage. If you knew he was using cocaine and decided a four game suspension was appropriate, then that’s the decision you made. You should not go back and change that decision because suddenly the public is aware of the situation.

It reminds me of the Ray Rice controversy which I wrote about in September of 2014.

If the team was aware of the allegation and decided on the punishment the court of public opinion should have no meaning. The only reason Missouri is creating this new suspension is to look good. It’s not about the transgressions Mauk made nor about the good of the team or the university. It is simply face saving and it disgusts me.

Believe me, I have no sympathy for Mauk. He made his bed and he can sleep in it. But this suspension is completely out of line with reality.

We should be judged for the crimes we commit at the time we commit them. The court of public opinion should have no say in the matter. If it did where would we all be? Examine your life. We are none of us innocents.

I’m ready to take some heat for this one but I strongly believe Mauk should be cleared to play football unless it turns out this video was taken after the original suspension.

2 thoughts on “The Hypocrisy of Sports and Maty Mauk”