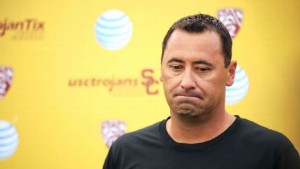 Non sports fans will be unaware that a fellow named Steve Sarkisian was fired from the job of head football coach at the University of Southern California earlier this year. Several drunken incidents led the athletic director of the school to the decision to fire Sarkisian.

He is now suing USC for $30 million because alcoholism is considered a disability and the Americans with Disabilities Act has rules about protecting disabled people.

To begin with the ADA doesn’t protect people with disabilities if their disability interferes with them doing their job. In the specific case of alcoholism this is spelled out quite clearly. The law states that an employer can discipline, discharge, or deny employment to an alcoholic whose drinking effects their performance. The case appears without merit from a legal standpoint. Sarkisian was sent home from at least one practice for being too drunk and there are rumors of many other incidents.

While that part is true and to my, non-lawyer, mind conclusive, it is not why Sarkisian’s lawsuit so nauseates me. This lawsuit is a slap in the face to all people with disabilities who are protected by ADA. It’s an insult to veterans who lost limbs, babies born with disabilities who must make their way through a difficult life, and anyone else who is truly disabled.

It’s as disgusting as someone faking a disability to gain the advantages laid out by ADA.

Normally I wouldn’t even be taking on a topic like this because I think almost everyone will agree with my opinions on the subject. Judging by the comments on the stories I’ve read this appears largely true.

The reason I’m writing this blog is because drug addiction is a terrible thing and can happen to anyone. Sarkisian deserves help. He needs treatment. People can and should be sympathetic to his plight. In this day and age there are precious few of us who have not been touched in some way by drug addiction. It’s a huge problem that needs to be discussed. Addicts need to be treated rather than ostracized. They should be given new opportunities if they overcome their addictions.

Sarkisian has my sympathy and to his credit has gone through treatment. I would encourage football teams to consider him for a coaching position and include monitoring for relapse behavior along with ongoing therapy.

That being said, he deserves nothing from USC. He hid his problem. He denied his problem. He let his problem adversely effect his job performance. He deserved to be fired. He should be ashamed for even filing the lawsuit.