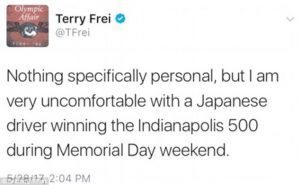 A former sportswriter for the Denver Post, Terry Frei, wrote that he was “very uncomfortable” with Japanese driver Takuma Sato winning the Indianapolis 500. The Denver Post fired Frei after a second tweet in which he seemed to associate Sato winning the race with the death of his father’s friend in the Battle of Okinawa.

There is the predictable political divide with one side hailing Frei for speaking his mind and calling critics snowflakes while the other insists it is Frei who is the snowflake and clearly a supporter of President Trump. I’ll leave the political nonsense to the jungle gym crowd where they can scream and yell at one another and accomplish nothing. I’d like to examine why Frei is uncomfortable. Because in this feeling he is not alone.

What’s important to state is there is no doubt the win made Frei uncomfortable. He felt that way and no apology can change his feelings. He was so uncomfortable he felt compelled to tweet about it. But from where does that feeling of discomfort arrive? Frei did not know his father’s friend at all, he did not serve in World War II, he has suffered no injustice from anyone Japanese. Certainly, Sato himself has done nothing to Frei. There is no personal animosity between Frei and Sato. And yet the victory makes Frei uncomfortable.

Maybe I’m wrong but I think the heart of Frei’s uncomfortableness is the notion people from Japan represents something he does not like. His dislike becomes more palpable when the race in question comes on Memorial Day. A day to honor fallen soldiers.

Frei learned to dislike or even hate Japanese people reading about the death his father’s friend. He carries mementoes that once belonged to the man. He has, bear with my amateur psychological diagnosis, almost taken on the role of that man. He seems to believe, in some sense, that he is carrying on the legacy of his father’s dead friend. He has written about him. He has learned to hate Japanese from his story.

I’m not trying to criticize Frie, although I’m sure it looks as if I am. I’m trying to understand how someone who has never had anything done to him by someone from Japan can clearly feel so deeply about an issue. His feelings are terribly wrong and he admits as much in an apology. He became emotionally overwrought. I get all that.

This pathology is important. I hated people of Arabic descent in the aftermath of the 9-11 attack. When I read about a white nationalist stabbing two innocents to death on a train in Portland I want to kill him and all those who espouse his views. The same hate Frie clearly feels, although he rationalizes it by merely saying he is uncomfortable, is within us all.

This hate fuels much of the sentiment we read each and every day in diatribe filled comments. This hate is what fuels the enemies of the United States. They hate us for what we have done. We hate them for what they have done. Frie hates the Japanese even though they did nothing to him, it is second-hand hate but it is real. He understands and controls that hate. He’s not spouting off nonsense or advocating killing anyone. He controls his feelings and understands their origins.

I think it’s important to understand from where we generate this hate. Those who cannot, or choose not to, understand the hate fall victim to it. Their own lives are consumed and destroyed by these feelings. They project their feelings onto anyone who is perceived to be associated with the same group as the one so hated.

They convince themselves everyone around them feels the same way and they must take extreme action. This is how a terrorist is born.
Frei is nowhere near this terrible fate. He is merely a peripheral victim. He lost his job and that’s pretty serious. But he didn’t do anything physical. He is not in prison. He is still alive.

What Frei did is within each of us, much worse lies below the surface of our civility.
I think that is the lesson for us all. Understand from where the hate comes. Understand it, control it, and be a better person. Don’t let it control you. Nothing good can come from this hate and rage.

Try to be a decent human being. Frei failed but his failing is not as egregious as it might have been. I’m more than willing to give him another chance. I hope others feel the same way.