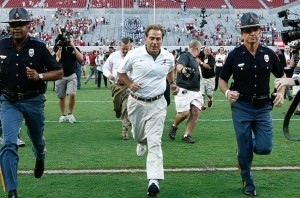 There’s an interesting story out of college football involving the Alabama Crimson Tide and the fact that the local Tuscaloosa police department pays the salaries of officers providing security at football games with no reimbursement from the University of Alabama.

On game days in Tuscaloosa the crowd in the stadium is larger than the entire town and the police department works with local Campus Police to provide security. According to records produced by the city this amounted to over half a million dollars in overtime expenses this past season.

On the whole I don’t think it makes much difference in practicality. The reason I think this is if the University pays for the service some arrangement will be made to return that revenue through tax breaks or other means.

Nevertheless, I have a strong opinion this subject.

The city is providing a service for the university for which they would otherwise have to pay. The University of Alabama would have to bolster campus police forces on game days or simply hire the police force to do the job.

The reason the city of Tuscaloosa likely provides this service is that they get far more than half a million dollars in revenue from the 100,000 people that descend on the town those seven days a year. They do it simply as a courtesy.

This situation reminds of strongly of a story in Atlas Shrugged where John Galt insists on paying Midas Mulligan a dime for the loan of his car for the day. The dime is a trivial amount and Mulligan might easily loan the car as a favor. Galt insists on the payment and I think the University of Alabama should do so as well.

The police department is providing a useful service to the university. This service comes at an expense and paying for it is an homage to capitalism.

Maybe it doesn’t make a difference in actual finances but I do think it’s an important statement to make as far as capitalism is concerned. There is nothing necessarily wrong with doing favors for friends but when somebody provides you a valuable service, pay for it. It could be as simple as buying them lunch. Doing so sets a good example for everyone.