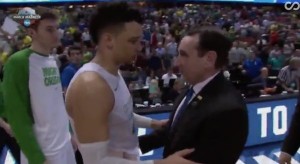 It’s March Madness and that means lots of hard fought basketball games. There was an incident after the Oregon v. Duke game that I think might give us all cause for reflection. We make many assumptions in life and, if we are honest with ourselves, sometimes these are completely incorrect.

Near the end of the game an Oregon player named Dillon Brooks took a very long shot as the clock was winding down even though his team had the game in hand. There were actually good reasons he did this including instructions from his coach. That’s not my topic for today though.

Coach Mike Krzyzewski approached Brooks after the game and said something to him. Afterwards people were wondering what was said in the exchange. Brooks responded that Krzyzewski told him, “You’re (Brooks) too good a player to be showing off at the end“.

Coach Krzyzewski, when asked, denied this and said that what he told Brooks was that he was a terrific player.

Brooks is a young man while Krzyzewski is a well-respected and older coach.

When I heard about the exchange I immediately and without much thought believed Krzyzewski. Why would a coach with such a distinguished record lie? Brooks was coming off an emotional win, perhaps he misunderstood, I thought charitably.

Then audio of the exchange was released.

Coach Krzyzewski has now apologized both for his original denial and for lecturing a player from another team.

My point is straight-forward. In a he-said/she-said situation how many times do we believe the person who appears to have more credibility. I think this is natural. The person who has more credibility has achieved that status for a reason. But the reality is far more nuanced. Sometimes the more credible person has more to lose. Sometimes the more credible person knows they can get away with a lie because the other party is less trustworthy. I think we see this situation far more often than we realize.

I’m of the opinion a lot of times the less credible person is not believed and suffers consequences, sometimes severe.

What I hope you take from this incident is while believing the person who appears to have more credibility might be natural, it’s often wrong. We should always dig a little deeper, if possible.

I’m curious. Without the conclusive audio evidence would you have believed Coach Krzyzewski? Would you have labeled Brooks a liar and lost respect for him?