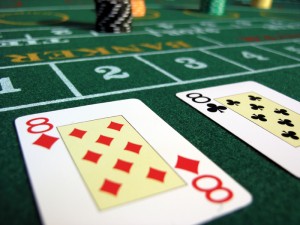 I just read an incredibly interesting legal story from the Associated Press about a case that happened in Atlantic City a little over two years ago.

A group of gamblers was playing the game of Baccarat at a table in Atlantic City when they noticed that the cards were coming out of the deck in original order. The decks themselves came from the manufacturer to the casino with the stipulation that they be shuffled beforehand. In this case the freshly opened cards were not so shuffled and emerging from the deck sequentially. The gamblers immediately noticed this and began making maximum bets winning over $1.5 million in short order.

The casino figured out what was happening and detained the gamblers and that’s when legal proceedings began. The gamblers filed a case against the casino for what they consider an illegal detention and that case is still being reviewed. Meanwhile the casino argued that they shouldn’t have to pay the money to the gamblers who still have the chips from the event but not the actual money.

Originally a judge ruled against the casino and a settlement was attempted but the gamblers refused to drop the illegal detention case so the other case went forward as well. Now the Superior Court of the region has agreed with the casino. Judge James Isman ruled that because the cards had not been shuffled, the game of mini-baccarat was illegal under state casino rules.

When I first read the case I was definitely on the side of the gamblers but I started to think about why the judge would thus rule and I’m no longer certain of my original opinion. I haven’t read the details of the case and I’m certainly not up on New Jersey gaming laws so my opinion here is largely speculation but that won’t stop me!

I think the judge ruled the way he did because the situation as described was no longer gambling. Let’s reverse the sides and say the casino had the deck setup in a way that the dealer knew about and used this to win hand after hand. This would clearly be a violation of the law even if the casino didn’t intentionally stack the deck in this manner. In order for it to be gambling I think there has to be an uncertain outcome.

An example would be the events in the movie The Sting where the antagonist hoped to cheat the house by laying down bets on races that had already finished. Would this case not fall under the same laws? Is it even possible that the gamblers themselves are guilty of a crime? The judge ordered that the casino doesn’t have to pay out the “winnings” although no charges have been filed against the gamblers.

Then there is the ethical aspect of the entire story. If you were presented with a way to win at a gambling game in which you knew the outcome; would you do so? For example, you know that a certain ticket will be pulled from a jar during a raffle and you are offered the ability to go through the ticket roll and purchase what will be the winning number. Would you do so? Is not doing so stealing in every sense of the word?

Judging by the comments below the original story I think most people are sympathetic with the gamblers and angry with the judge and the casino with the ruling. As I said, it’s an interesting case.

Any lawyers? Any lawyers from New Jersey familiar with gaming laws? I’d love to hear from people.