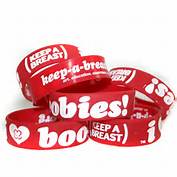 There was an interesting case a while back that is slowly making its way through the courts and is now one step short of the Supreme Court.

One of the various methods in which people support breast cancer research these days is a bracelet with the words I (heart) Boobies on it. It’s mainly designed for younger girls who wear that sort of thing and the Easton Area school district in the Keystone State of Pennsylvania decided that it was sexual in nature and banned students from wearing the bracelet.

A pair of girls defied the ban on Breast Cancer Awareness day in 2010 and were suspended for their defiance. Multiple courts have ruled that the district did not prove the bracelets were disruptive with the most recent being a federal appeals court. The district voted to continue the case which means it now heads to the Supreme Court.

The reason I find the case interesting is that it is a clash of my Libertarian ideals. On one hand I think the school has every right to have a dress code and enforce it. On the other hand I think individuals have the right to wear what they choose as long as it is not particularly disruptive.

The school board banned the bracelets originally because the term boobies was determined to be lewd and designed around sexual themes. This violated the dress code restricting sexual suggestive language or images. Several other schools have banned the bracelets as well.

So, where does a Libertarian land on this issue?

The bracelets are clearly not sexually suggestive and I reject that argument out of hand. It’s a bit humorous and certainly mentions the word boobies but it just doesn’t rise to the level of being sexual in my opinion. Likewise there seems to be no evidence that the bracelets were causing disruption in the school.

On the other hand, if the school wants to ban, say, black socks, then that’s their right. They pass a rule and any student who violates it should expect the punishment they get. It’s a stupid rule to be certain but the school has the right to make rules about dress codes. This is clear.

In the end I’m going to side with the district although not because I think the bracelets are lewd or disruptive but simply because the district board has the right to create whatever dress code they desire. If the students and parents of that district object they can elect new representation next time around.

I think what would have been best is if the girls followed the rule that year but started a political campaign to remove those who voted for the ban from office. Getting board members elected who see the stupidity of the rule and reverse it. That’s government by the people for the people.

That’s what we want. The courts have their place to be certain but I think every time we resort to them rather than creating a real political solution we get further away from what the Founding Fathers desired.

If you don’t like the decisions your representative makes; be it local, state, or federal, you have the power of the vote. When we hold people responsible for their decisions, not the rhetoric they spew during the election cycle, we make the country a better place.

Not to say that I don’t love boobies, I do.