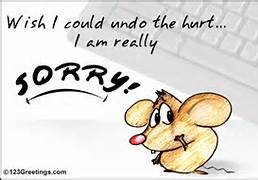 There was an interesting article in the news which was put, mistakenly in my opinion, in the science section and thus I stumbled across it.

The nation of Cameroon issued an apology for their ancestor’s involvement in trading slaves to Europeans thus beginning the long chain that brought those slaves to plantations in the southern United States. The apology was issued specifically to genetically identified relatives of those still living in Cameroon but was extended to include anyone affected by the policies.

The genetic tracing part of the story is why it ended up in the science section I suspect. In any case, as I was perusing the comments I noted that there was a fairly heavy leaning towards the idea that it was wrong to apologize for something for which you are not responsible.

Clearly the people in power in Cameroon today had nothing to do with the slave trade of past centuries. The argument suggested that it was ridiculous to make the apology. That it was meaningless. That a the best remedy was to act with ethics and morality in the future.

I’m not unsympathetic to this point of view. I do think the apology is being made by people who did nothing wrong in the first place. That it doesn’t help those directly or indirectly effected by those misdeeds. It can even be said that such apologies can be used to excuse bad behavior.

On the other hand I do think an apology has the ability to heal hurt feelings. While apologies are just words that do not affect any physical change they can set the path towards a better future. It is probably true that an apology, even when for something you personally did, doesn’t really do anything to redress the original harm. It is merely an indication of your acknowledgement of wrong-doing. Of your intention to do better in the future.

Slavery was wrong. My ancestors weren’t even in the United States during slavery so should I apologize for it? What’s my responsibility?

Slavery wasn’t my fault. I didn’t do anything to promote its cause. If I don’t want to apologize for the actions of people who died long before I was born then I have no obligation to do so. However, I am more than willing to denounce slavery. To admit that the United States, my country, engaged in this despicable practice for generations. I’m sorry that it happened. I’m sorry my country did such a thing.

Let’s dial it down a notch. Let’s say I’m at an event and one of my friends does something boorish. Gets drunk and makes inappropriate comments.

In the end, I guess I’m a proponent of both. It doesn’t hurt to apologize for my friend’s behavior. It’s better that I try to stop it before anything else happens. That I take steps to make sure it doesn’t happen again. But, why not all of the above? Everyone knows I didn’t do it but they appreciate my apology nonetheless.

Must you apologize for someone else’s behavior? No.

Should you? It’s up to you.