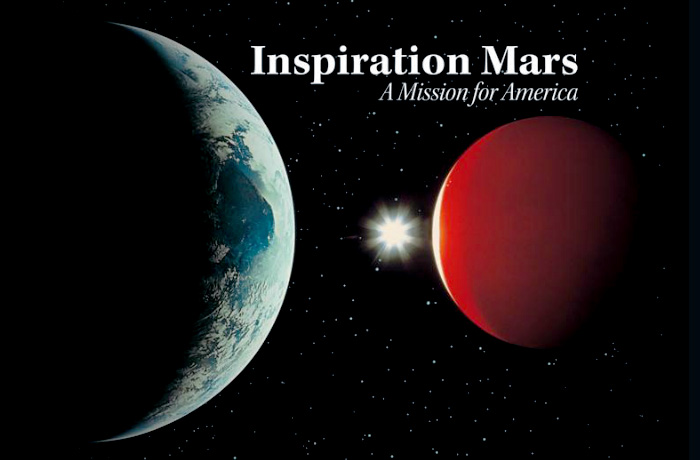 A fellow by the name of Dennis Tito is making news in my little corner of the space-geek world with a plan to send a manned mission to Mars. One of my favorite bloggers, Alan Boyle of Cosmic Blog, wrote up an interesting summation of events so far.

I’ve long been a proponent of robotic missions over manned missions for a variety of reasons that I don’t want to get into today. What I do want to discuss is the nature of this particular plan and whether it is sheer madness, a great idea, or something in-between.

The broad plan itself is simply to send two astronauts to Mars on a trip that would circle the red planet and return to earth in a total of 501 days. As Earth and Mars rotate around the sun there are only certain times when the round-trip can be accomplished so quickly. The next such alignment occurs in January of 2018. This means the technology has to be ready to launch at that time. Five years is a remarkably short period to make this happen.

The detailed plan is extremely sketchy but the basic technology is understood and certainly not impossible. They would have to use a rocket that is currently incomplete but scheduled to be finished by that time. A major stumbling block is the speed at which the returning vessel would enter Earth’s atmosphere. There are other pressing problems that currently have no solution but the entire concept is possible.

The funding for the operation is to come largely from donations and Tito’s own personal wealth.

Is the plan a worthwhile endeavor?

As I stated earlier, I’m of the fairly strong opinion that robotic exploration is the most useful method for finding out information from Mars, the moon, and other places within the solar system. Humans are just too frail and concerns about radiation exposure, food and water, waste disposal and other barriers make human space exploration a waste of time and money. We’ve already sent plenty of robots into orbit of Mars. Landed them on Mars. In this case we’d be spending billions of dollars to send two people on a round trip to Mars for no good scientific purpose.

So, at this point you probably think you’ve got my final conclusion all figured out. You’d be wrong.

If Tito wants to raise the money and make this a reality, I say go for it. It’s his money and his donor’s money. The astounding publicity of the event will certainly make millions of people as big a proponent of space exploration as am I. In the end it might create more money and science dedicated to robotic exploration.

Personally, I’d prefer that he use his considerable charisma and effort to help NASA fund missions that have been cancelled because of lack of funds. To that Tito might tell me to do what I want when I’ve made a few billion of my own, and he’d be right!

I applaud Tito’s spirit and wish him well. Although I would offer one major criticism. Don’t say The Right Stuff times ten ever again. Such a thing is impossible. Thank you for your courage and sacrifice Alan Shepard, Gus Grissom, John Glenn, Scott Carpenter, Wally Schirra, Gordon Cooper, and Deke Slayton.

Now, if only I could get a few million people to purchase my books maybe I could fund one of those cancelled missions!